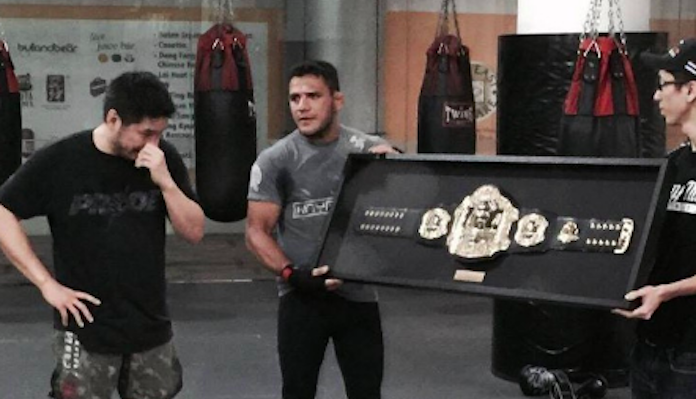 ONE Championship Chairman and CEO Chatri Sityodtong is accustomed to dealing with ONE Championship belts, but that doesn’t mean he doesn’t appreciate the hard work that goes into winning a UFC belt. Sityodtong, who is also the owner of EVOLVE MMA in Singapore, actually received a UFC belt from former lightweight champion and EVOLVE fighter Rafael dos Anjos, and calls it ‘one of the best gifts’ he’s ever received.

“Exactly 3 years ago, I received one of the most beautiful gifts I have ever received in my entire life. I almost never cry, but I cried badly that day. I was in the middle of hitting pads at EVOLVE when my bro Rafael Dos Anjos suddenly stopped our training session together to give a long speech to everyone about his life and his career. I was completely caught off guard and surprised by everything. Rafa gave an emotional speech of gratitude for everything that he and I had been through together since 2009.

As a token of our journey together, Rafa presented me with his UFC belt as a surprise. (In the martial arts world, the most prestigious world championship titles are ONE Championship, UFC, and Bellator). Immediately, I got choked up, tears welled up, and I started to cry. For me, the belt itself means nothing because I did not fight in the cage myself to win it. However, for Rafa, the belt represents his life story, his dreams, his sacrifices, his tears, his triumph over poverty, his warrior spirit, his heart of gold, his everything. I never expected in a million years to receive such a precious gift of deep sentimental value. It is literally one of the best gifts I have ever received from anyone. I will always cherish this belt as a symbol of our lifelong friendship, Rafa.

The brotherhood of martial arts can never truly be understood unless you are also a true martial artist. A warrior’s bond is for life. Martial arts is not about fighting or violence. It is about unleashing human potential by instilling the precious values of humility, integrity, courage, loyalty, hard work, discipline, honor, respect, and so much more. Thank you Rafa for giving me a beautiful memory. I am truly blessed to have you in my life as my brother in arms. Let’s go conquer more dreams together!” – Chatri Sityodtong on Facebook.

Rafael dos Anjos won the UFC lightweight title in 2015, defeating Anthony Pettis by decision. He defended the title one time, with a first-round TKO of Donald Cerrone, before surrendering it to Eddie Alvarez, who later migrated to ONE Championship.

Are you surprised to learn Rafael dos Anjos gave one of his UFC belts to Chatri Sityodtong?