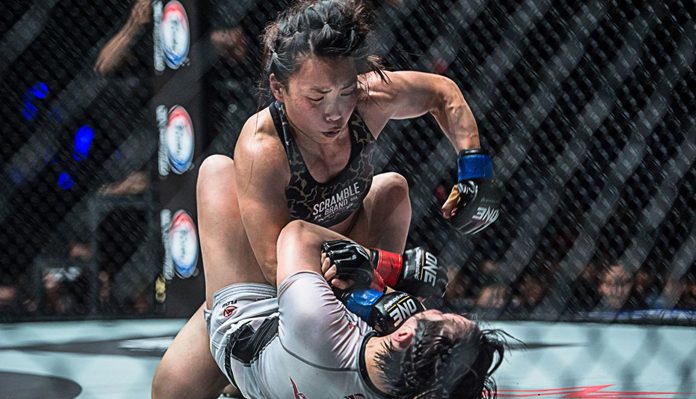 The Ryogoku Kokugikan in Japan is the site of ONE: A NEW ERA on 31 March. It will be one of the most significant martial arts shows in 2019 as it marks the first time ONE Championship has put on an event in Japan.

Local competitors will be in action throughout the card including the main event that will see Japanese legend Shinya Aoki challenge Eduard Folayang for the ONE Lightweight World Title in an epic rematch.

Earlier in the prelims, another Japanese pioneer, Mei Yamaguchi will face Russia’s Kseniya Lachkova in a women’s atomweight clash that could determine the next title challenger in the weight class.

Yamaguchi has already had two cracks at Angela Lee, but another win for the former could put her right back on the cusp of another shot.

When it comes to ONE: A NEW ERA and the match with Lachkova, who has the edge? Let’s take a look at a few categories.

There is a massive gap in age in this bout. Yamaguchi is 36 years old, and she’s been competing for 12 years professionally. Lachkova is just 23.

To put the whole thing into perspective, when Yamaguchi began her career, Lachkova was only 11 years old.

While there is a significant age gap, Lachkova has been active in her short professional career. Lachkova has already had 12 pro bouts. That’s much less than Yamaguchi’s 30, but clearly, Lachkova has gotten her feet wet.

As usual, Mei Yamaguchi will have to overcome a sizable height disadvantage.

Tapology generously lists Yamaguchi at 5’0″ and Lachkova at 5’5″. Giving up five inches could be an issue, but Yamaguchi has always proven to be great at closing the distance and getting into striking range.

The young Russian hasn’t shown to be much of a striker early in her career. She likes to grapple, and despite the height advantage, taking the battle to the ground might be her best strategy.

You’d think the longer martial artist might have the edge in striking. However, in this bout, Yamaguchi is the stronger competitor in stand-up exchanges. The advantage is not a big one, but Yamaguchi has a bit more power.

That said, Lachkova is especially dangerous in the clinch. Her height advantage augments this quality. Lachkova’s knees have been dangerous weapons for her in previous matches, and she could use them again when things get close and tight with Yamaguchi.

Mei Yamaguchi is more of a survival grappler. She’s scrappy on the ground, but not an expert Jiu-Jitsu practitioner. Lachkova’s game is more advanced as a grappler. She’s capable of transitioning to a variety of submissions, and her long legs are useful when she pulls guard.

Opponents in top position can never rest in Lachkova’s guard. She’s capable of sinking in chokes from everywhere. She’s the more dangerous grappler.

Neither woman has ever been finished in a professional MMA bout, but that distinction is a little more impressive for Yamaguchi because of how long her career has been, and the opponents she has faced.

She’s a rugged competitor who never seems to stop moving forward. If Lachkova or anyone else can be the first ever to stop Yamaguchi, it would be a massive feather in their cap. Easily, Yamaguchi is the most durable of the two women.

Going the distance hasn’t been a problem for Mei Yamaguchi or Kseniya Lachkova. However, when you look at Yamaguchi’s record, there are a number of five-round matches.

Lachkova hasn’t had to compete in as many bouts scheduled for 25 minutes. The match at ONE: A NEW ERA isn’t scheduled for five rounds, but you can bet Yamaguchi will be ready to go for as long as needed.

Yamaguchi’s pace seldom slows, and when it does, her second wind is never far away. While this isn’t an indictment on Lachkova’s stamina, what we’ve seen from Yamaguchi leads to tab her as the one with the deepest gas tank.

This one could be close, but there are a few factors to consider. First, is this the bout where Yamaguchi starts to look her age? She’s been active and fiery in the cage throughout her career, but at some point, you wonder if she slows down as she approaches 40 years old.

Secondly, what happens if Lachkova can’t take the bout to the ground? She can have success but is more apt to be worn down by Yamaguchi’s pressure and attack.

Lastly, if the bout goes into the third round and it’s been a physical scrap, will Lachkova have the stamina to remain dangerous in the biggest match of her life?

While Lachkova has had 12 pro bouts, this will be her first time on a major stage. That could also play a factor. Because of these things, it’s safe to lean toward Yamaguchi in this bout to win by decision.

Who do you think will come out on top when Mei Yamaguchi and Kseniya Lachkova meet in Tokyo?