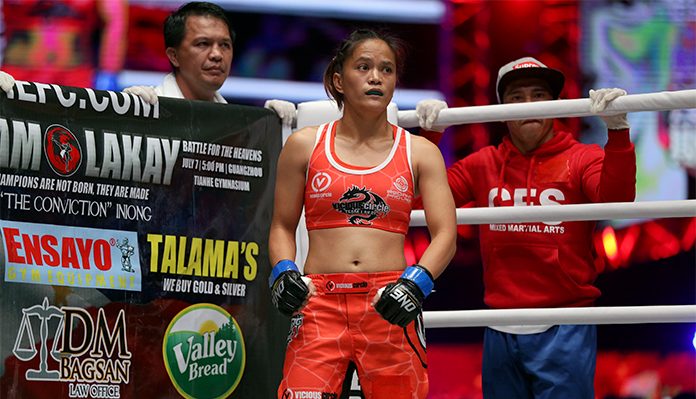 Team Lakay has established their name in ONE Championship as a fearsome group of World Champions. For Gina Iniong, 2019 is the year where she hopes to contribute to the prestige her gym currently possess.

Iniong competed twice in 2018, starting the year right with a unanimous decision over Jenny Huang last 20 April at the ONE: Heroes of Honor.

Roughly three months down the road, she suffered a devastating loss when Istela Nunes dominated her at ONE: Battle for the Heavensto win by unanimous decision.

Iniong was on the defensive most of the time and only offered the occasional counter during the entirety of the bout. This gave the Brazilian the opportunity to showcase her Muay Thai skills that mostly connected on the Filipina’s head and body. The Lakay warrior also failed to execute a couple of takedowns which left her wide open.

“My loss to Nunes was a wake-up call for me. I knew I had to make a change, that I need to step up my game more,” Iniong admitted.

Realizing her lack of aggressiveness and her lack of grappling skills, Iniong hit the gym hard to get ready for her next match.

“Since then, I dedicated my time and effort to improve my overall game. It was a decision I had to make, and one that I continue to do in training while preparing for my next bout,” Iniong said.

On February 16 at ONE: Clash of Legends, she will be facing Jihin Radzuan in Bangkok, Thailand.

The undefeated Malaysian came from a dominant performance last December at ONE: Destiny of Champions against Huang. Radzuan’s combinations connected and she also displayed her superior grappling skills against Huang in one of her most thrilling performances to date.

“We know how good Radzuan is that’s why we have a great game plan ready for this match. I am very fortunate to have an amazing team supporting my development and building my confidence,” Iniong said.

“Coach Mark [Sangiao] has put together a sound strategy that will put me in the best position to win. It is going to be an exciting match, and I cannot wait to test my skills once again.”

Not wanting to be outshined by her brothers and their World Titles, Iniong knows that she has to beat Radzuan if she is to still be considered as a contender for the ONE Women’s Atomweight World Title.

“This is a crucial match for me. I need to prove that I still belong in the title conversation. I need a statement-making victory,” Iniong said.

With her goal clearly set and with the support of her teammates as well as her countrymen, Gina Iniong is pumped up to redeem herself and prove that she will be one day be a World Champion.

“Now my dedication and hunger for this sport are in an all-time high, I know I can turn my previous setback into triumph. I am ready for anything,” Iniong concluded.