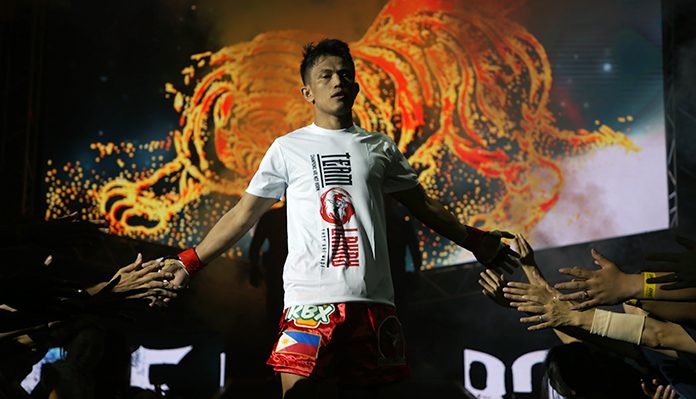 It was not the result Team Lakay wanted to start the year on. Back-to-back losses for both Edward Kelly and now former ONE Strawweight World Champion Joshua Pacio was disheartening news, given the amount of effort the team had put into preparations for months. Like always however, the team treats the losses as just another lesson they need to learn from.

For Kelly, the loss to Singaporean Christian Lee will be taken to heart.

In their highly-anticipated rematch at ONE: ETERNAL GLORY earlier this month, Lee was able to stop Kelly in the first round as he aggressively rained down punches from mount to win by way of TKO.

For Kelly, it was a lesson well served.

“Every fight is a learning experience, whether we win or lose. This fight is no different. I learned a lot about myself, and I plan to come back stronger. Hats off to Christian Lee, he’s an amazing kid and he has a bright future ahead of him. He was the better man that night,” Kelly said.

Team Lakay coach Mark Sangiao’s motto of “We win or we learn” has been etched deeply in Kelly’s heart. As he reviewed his performance with his team, Kelly discovered where he fell short and started planning on how to move forward.

“I have a lot to improve on, especially with my escapes and my defensive wrestling. That’s something that I need to work on in the gym, and I can’t wait to get right to it. This is a continuous learning journey for me as a martial artist. The next time fans see me in the cage, I’ll be a much more improved fighter,” Kelly admitted.

Kelly also shared his thoughts on Lee proving that there were no ill-feelings in regards to the match results.

“Christian is a very lucky kid to be in the position that he is in. He has all the support from his family and he has access to world-class training with his wrestling and his grappling. I think he can really go far in this sport. He’s young and talented, and he has the right mindset,” Kelly mused.

Kelly is only half of the representative of Team Lakay who failed to achieve a victory that night. Joshua “The Passion” Pacio lost the title to Yosuke “Tobizaru” Saruta by razor-thin split decision. As a teammate, he believed that Pacio won the match but accepted the decision nonetheless.

“Joshua had a rough night. It was a long and rough night for him. Yosuke Saruta is a very well-rounded fighter. We have to respect the judges’ decision. The important thing is that Joshua comes back from this stronger and better than ever,” Kelly mentioned confidently.

“You can be sure we are back in the gym again right away and we’re going to work until our weaknesses become our strengths. Me and Joshua will be back.”

The loss does not mean the end of the world for Edward Kelly.

The veteran knows what he needs to do in order to redeem himself and that is to continuously improve on his skills back home.

“There is still a lot of action to go. It’s still very early in 2019. We can’t dwell too much on our losses. There are many opportunities to claim victory this year, we plan to make the most of it,” Kelly concluded.