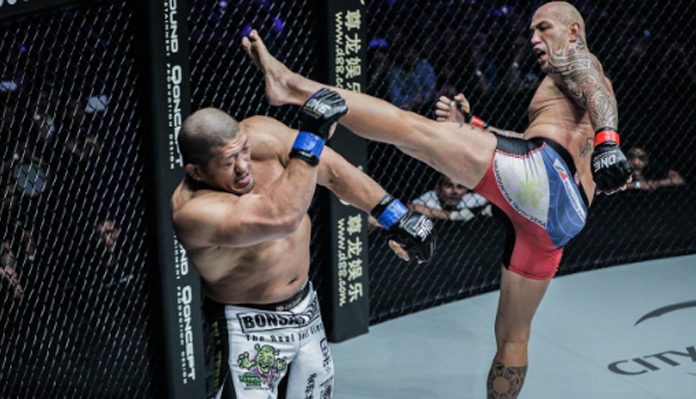 At long last, ONE Championship heavyweight kingpin Brandon Vera is once again set to defend his title. The Filipino-American striking specialist will do so on November 23 in Manila, The Philippines, where he will battle Italy’s Mauro “The Hammer” Cerilli.

This news was first reported by MMA-Today’s Al Zullino, and subsequently announced by the promotion.

Brandon Vera has not fought since December of 2016, when he knocked out Japan’s Hideki Sekine in the first round, retaining his title in the process. His next two bouts were also first-round knockout wins: one over Paul Cheng, and another over Igor Subora, which earned him the ONE heavyweight title. He’s 15-7 overall.

Mauro Cerilli, who is the Cage Warriors heavyweight champion, last fought in March when he mauled Ireland’s Karl Moore to a 15-second knockout victory. The Italian finisher is currently a strong 11-2 overall, but has yet to fight an opponent as well-versed as Vera.

Brandon Vera’s long absence from the ONE Championship cage has not been due to injury or illness, but due to a budding film career, as he recently told BJPENN.COM Radio.

“It’s been my calculated choice,” Brandon Vera said of his layoff . “When I say calculated choice, I asked permission before I went away for so long, from everyone, so that I could shoot a movie in the Philippines. It was called BuyBust. It was a huge action film from The Philippines, shown all over the world. It was a really good project. Even if I had to do it all over again, I would. The time versus sacrifice, yeah, it was definitely worth it. It was an experience.”

ONE Championship’s anticipated return to Manila will also feature a lightweight showdown between former champion Eduard Folayang and Amir Khan, who has produced more knockouts than any other fighter in the ONE cage. The winner of this bout will be crowned ONE’s new lightweight champion, as the former champion Martin Nguyen vacated that title earlier this year to focus on his duties as ONE featherweight champ.

How do you think Brandon Vera will look in his long-awaited return to the cage?