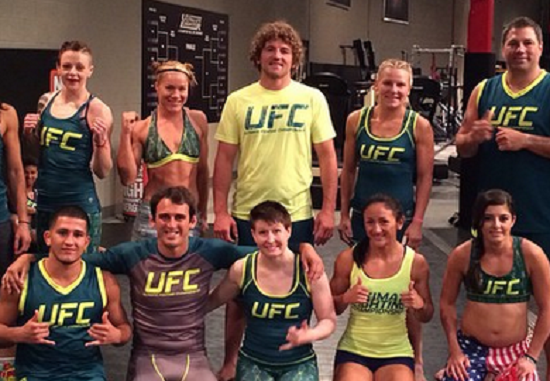 ONE FC welterweight champion Ben Askren has spent time training with Roufusport head coach Duke Roufus, and as a result, is defending Roufus’ training methods which have been criticized recently after the death of Dennis Munson Jr.

Since Munson’s death, UFC fighters, former students, and even instructors have all opened up about Roufus’ training methods, which they disagree with.

“The organization is there in wrestling to make a very well-balanced, organized system. In MMA, all of these coaches are doing their best. They’re trying to throw stuff together. Duke didn’t have a MMA coach because when he was coming up, MMA didn’t exist. I’ve been to a lot of MMA gyms. I’m not going to say Duke’s is perfectly organized, but it’s definitely way more well run than the majority of places I’ve been.”

“One of Duke’s biggest things is – and it actually helps me from a fighting standpoint – he’s very adamant on defense. Really, when he gets frustrated, they’re not paying enough attention to their defense. He makes a point that we’re fighters and this is our living. The more times we get hit, the shorter our career is. That is one thing Duke is adamant about.”

“Duke’s great to me. I can definitely see the criticisms that he’s harsh sometimes. I get that, but overall, I think the thing to take away is, Duke doesn’t have ill will or is mean on purpose to people, which is what Rose and Eric were insinuating. He’s definitely always been good and fair to me. If he does criticize people, I think lots of times he thinks that’s what is going to help them and that’s what he feels is best at the time.

“No one’s perfect. No one’s going to say the right thing to an athlete 100 percent of the time. He tries to say what’s in the best interest of the athlete as many times as possible.”