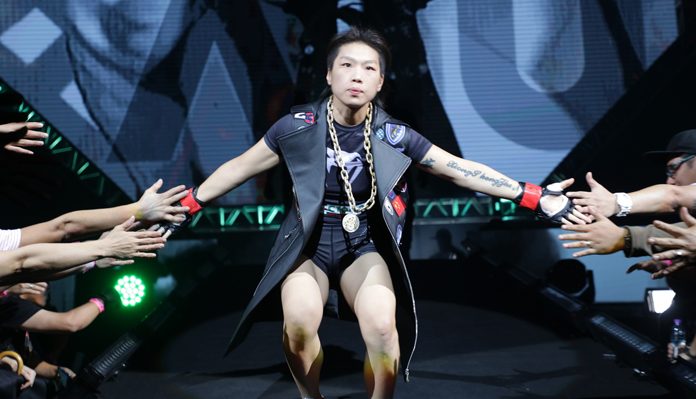 For most fighters, it’s water off a duck’s back. But for others, the reality that 10 weeks of blood, sweat and tears have equated to nothing can get the blood boiling. Xiong Jing Nan fits into that latter category.

When her ONE Women’s Strawweight World Title defense against “Unstoppable” Angela Lee was cancelled back in November, the Chinese wrecking machine was angry.

“I would think that anytime you put in 8-10 weeks of your life into something, and you have the rug pulled out from underneath at the last minute, you’re going to be a little bit irritated, annoyed and upset,” Xiong’s head coach, Don Carlo-Clauss revealed.

“She’s a professional and she handles it, and it’s part of the game and these things happen, but it doesn’t mean we have to like it. She was not happy about it. We worked really hard and we were really excited to showcase the hard work and it didn’t get to happen. Now, we’ve had more time to sharpen our sword and get ready ready for this one. At the end of the day we’re going to be that much more prepared.”

ONE Women’s Atomweight World Champion Lee was forced to withdraw from ONE: HEART OF THE LION with a debilitating back injury.

Carlo-Clauss, the head striking coach at Bali MMA, said he and Xiong never doubted the legitimacy of Lee’s injury, but admitted the late nature of the call had lit a fire beneath the 31-year-old.

And in an ominous sign, Xiong is now better prepared to secure glory at ONE: A NEW ERA in Tokyo, Japan on 31 March.

“Everything is the same as it was back then, we’re just a little bit sharper,” Carlos-Clauss said.

“That chip on her shoulder is just a little bit bigger now. It’s obvious who’s the favorite and who’s getting the love from the promotion and we like that,” he said. “We like being the underdog, we like going into enemy territory and playing the spoiler and I expect Jing Nan to go in there and put in a dominating performance.”

With an impeccable record of 13-1, Xiong Jing Nan will eye her third defense in Tokyo. She returned to Bali MMA weeks ago to hone her craft for the biggest bout of her career.

“This will be her third fight with us — her fourth camp because the last fight got cancelled — but she’s been here quite regularly since she came for that first fight,” Carlo-Clauss said.

“After the fight she goes home to spend a couple of weeks with her family and then she’s right back to Bali and back to work. She’s really become part of the family in Bali. She’s one of the hardest workers and she’s keen to help out the younger fighters. It’s great having her around.”

Do you think Xiong Jing Nan can defend her title against Angela Lee in Tokyo?