Amir Khan dubbed it the “most satisfying performance” of his career. A heavy underdog in his last bout against Honorio “The Rock” Banario, Khan prevailed — and in style.

It was a victory of epic proportions for the 24-year-old Singaporean, who bashed down the door for a shot at the vacant ONE Lightweight World Title.

Khan will now bid for gold, challenging former champion Eduard “Landslide” Folayang in the co-main event at ONE: Conquest of Champions at Manila’s Mall of Asia Arena on Friday, November 23.

Known for his heavy hands and powerful kicks, Amir Khan stunned the world by submitting Filipino Banario inside the first round at ONE: Beyond The Horizon in Shanghai, China in September. And he credits a new voice — the new face of Singapore’s famed gym Evolve MMA — for his rapid transformation. 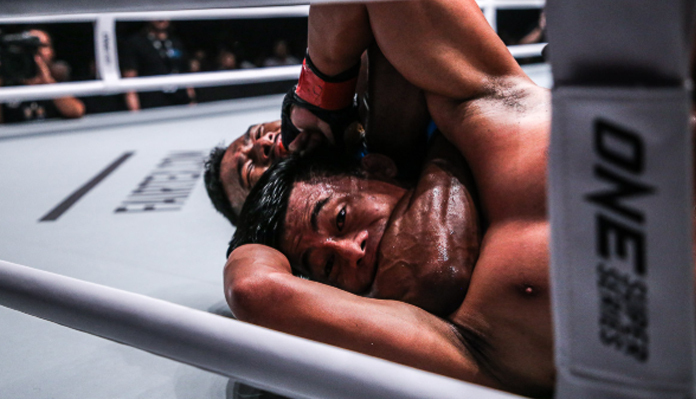 “I never trained so hard in my life until Eduardo started training me,” said Khan, who attributed his grappling skills to the tutelage of the gym’s new head coach Eduardo Pamplona. “We only trained for one month, but he pushed me like crazy, and he made me drill the right stuff. We were drilling everything in the fight game to get me ready, and we continued that into the fight.”

Khan said he and Pamplona left no stone unturned in their efforts to construct the perfect game plan and defeat Banario in style.

“We saw what Banario was, and what we could capitalize on. I was 100-percent confident,” Khan said. “I knew I was going to get a win and I had no trace of doubt in my mind. Because of all my hard work in training, it made me even more confident.

“We trained in every scenario, we covered all the bases, we didn’t leave anything out.

The victory over Banario also topped the list as one of his greatest achievements in the ONE Championship cage.

“I’m a really big critic of all my fights because I always feel I didn’t perform to my potential, but I will say the last fight [was my best] because Banario is a tough fight,” Khan said.

“Everybody was expecting him to win and I just made it look easy, so I feel like that was my most satisfying performance.”

Amir Khan will look for a similarly impressive victory against another Filipino talent when he battles Eduard Folayang this Friday night in Manila (Friday morning in North America).