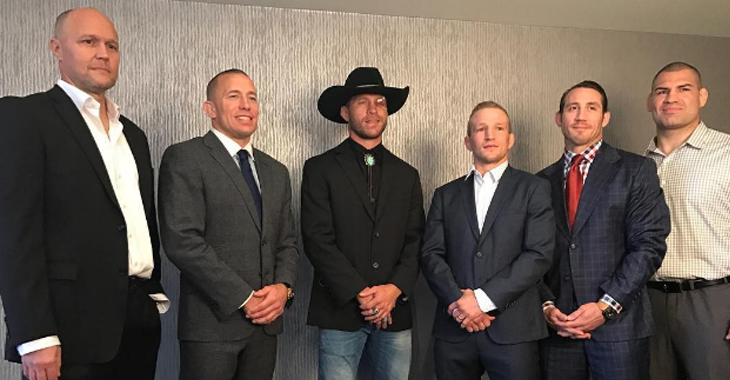 Immediately, the MMA community took to social media, with countless fighters taking to social media to not only express their support for the MMAAA, but also to ask how they can join the association.

This week, the MMAAA received a cease & desist letter from several lawyers, informing them that their actions would be detrimental to the ongoing litigation in the anti-trust lawsuit against the UFC.

Now, MMAFighting has received the response from the MMAAA directed at the lawyers:

“As Georges St-Pierre, Donald Cerrone, T.J. Dillashaw, Tim Kennedy, and Cain Velasquez made clear in the official public announcement last week, the Mixed Martial Arts Athlete Association (“MMAAA”) is all about looking out for the fighters and their well-being long-term.

Yesterday, the MMAAA received a “cease and desist” letter from a group of lawyers seeking to stop the MMAAA from signing up fighters and sticking up for their rights against the UFC and its owners WME-IMG. The MMAAA will do no such thing. Those lawyers - who represent only a few fighters - are focused on getting some money out of one case, of which they seek a significant portion for themselves. Those lawyers do not speak for anyone else, and certainly not the MMAAA and all the fighters the organization represents now and will quickly grow to represent in the sport.

Over a year ago, those same lawyers reached out to the MMAAA to join forces with us. We had a meeting and made clear that the MMAAA’s primary focus would be on achieving three core goals: 1) substantially increasing UFC fighter pay to 50%; 2) securing all-encompassing long term benefits for UFC fighters; and 3) a settlement to compensate past and current UFC fighters for all of the UFC’s wrongs. To achieve these goals for the benefit of the fighters, we also made clear the MMAAA needed to receive a percentage of a monetary settlement to cover the costs to fund the MMAAA for staffing and attorneys both for past work getting to this point and the long fight ahead. The lawyers made clear that they did not share the MMAAA’s vision. They are focused on a short-term monetary recovery, of which they will seek 33%, and then they are gone from this sport. We parted ways at that point.

The MMAAA is all about the fighters benefitting when the UFC is finally forced to take a powerful group of the fighters seriously. The MMAAA will be executing on that plan and will not be stopped in this effort on behalf of fighters.”