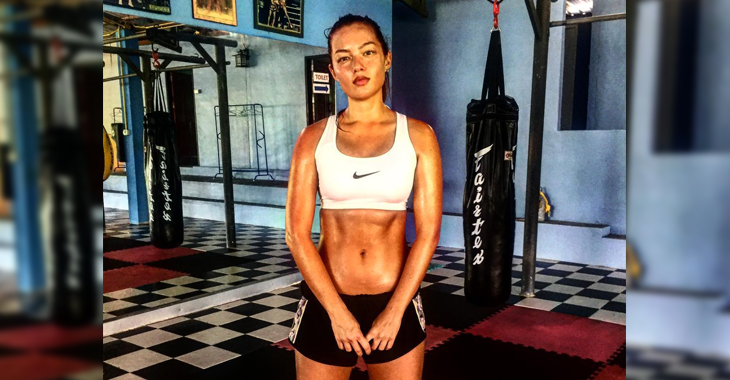 Don’t let the Sports Illustrated Swimsuit model job description fool you because Mia Kang is a fighter, too.

After spending a good part of her life in the modeling industry and going through every eating disorder in the book, one experience in a Muay Thai fight camp in 2016 changed Kang’s outlook on life and gave her a new understanding of her body.

“I just wanted to go to Thailand and be in the sun,” Kang said on last week’s episode of The MMA Hour (transcribed by Marc Raimondi for MMA Fighting). “Muay Thai and living in a training camp and going through all that, it taught me to respect my body. It brought me out of everything I was going through. Even basic things like eating three meals a day — I learned how to do that. I found strength in my body that I never knew I had. I saw things in my body … I had a six pack at one point — never in my life did I think I was gonna ave a six pack. It really gave me my self-confidence and really helped me rid a lot of insecurities that were weighing me down my whole life.” Kang, who started modeling at the age of 13 has lived on both sides of the body spectrum, growing up overweight and bullied to going to the extreme opposite with suffering from numerous eating disorders. With her professional Muay Thai debut coming by way of third round TKO earlier this year, Kang is pairing her new passion for fighting with her modeling career as she has gotten support from Sports Illustrated on her new endeavor.

“The two things coupled together,” she said, “really gave me the confidence to come back to New York and come back to the fashion industry and the modeling world — the entertainment industry — and say, ‘I’m not gonna conform to your standards anymore. I’m not gonna starve myself and be insecure about myself because I’m trying to fit into a size zero pair of jeans. I’m not going to do that anymore.’ I found health, confidence, happiness through this sport, through everything. This is who I am. This is the kind of woman we need in our magazines. This is the kind of role model we need for our kids.

“I’ve been that 14-year-old girl who’s looking through magazines, going, ‘Why don’t I look like that? Why am I not that skinny?’ No. Something needs to change. Really, Muay Thai has done more for me than people know. People look at me and they think, just another model posing in those gloves. But I’m about that life — I’m about that life.” With picking up MMA manager Malki Kawa who represents MMA stars such as Jon Jones, Tyron Woodley, and Jorge Masvidal to name a few, Kang says she does have an interest in competing in mixed martial arts but won’t be rushing it. The model and fighter has plans to get more Muay Thai fights under her belt but will be getting some other martial arts training done as well.

“In the meantime, really laying down some foundations in wrestling, some jiu-jitsu,” Kang said. … “Let’s not forget, this is fun for me. This is what I want to do. I’ve really fallen in love with martial arts and I wish I’d done it earlier and I want to see what else is out there.”