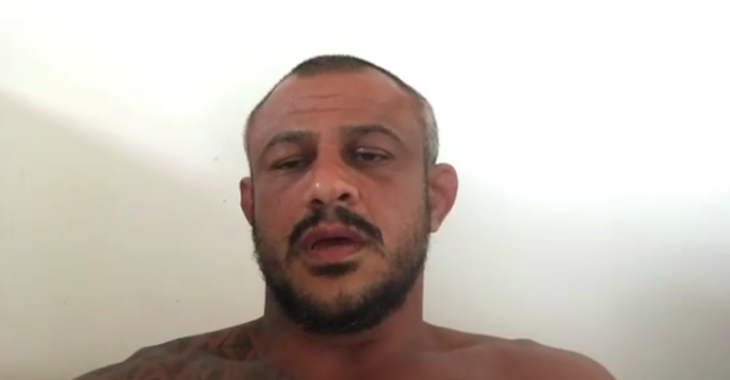 According to a report from MMA Fighting, MMA veteran Marlon Sandro is facing multiple charges after allegedly attacking his fiancée Tayssa Wuensche on the streets of Rio de Janeiro late last year.

During this grisly attack on his fiancée, the former Bellator and Sengoku fighter is said to have badly injured her arm, choked her unconscious, and then continued to punch and kick her when she regained consciousness. Sandro is now facing attempted murder charges for this attack. He could wind up serving 20 years in prison if found guilty of these charges.

Police began looking into this case when Sandro’s attack became public knowledge on social media (thanks to a disturbing Instagram post, seen below).

Unfortunately, this is not where the trouble ends for the Brazilian fighter. According to MMA Fighting, a second police report, filed earlier this month, details another grim incident in which an intoxicated Sandro broke into Wuensche’s house, threatened her with a knife, and smothered her with a pillow when she cried. Amidst this chaos, Sandro is reported to have threatened to kill Wuensche, blaming her for ruining his career. Luckily, he was ultimately stopped by her mother and brother, who she was able to text during the fracas.

A court date has not yet been set for Marlon Sandro, but unsurprisingly, he’s been barred from his long-time training camp, Nova Uniao.

On Tuesday, the fighter released a video on Instagram, claiming he’s unemployed and needs to fight.

“Guys, I came here to ask you a chance to work,” Sandro said in his native Portuguese (translation via Guilherme Cruz of MMA Fighting). “I’m unemployed, I need to work, I need to fight, and I’m asking you all an opportunity. I have no problem leaving the country, traveling, working. I’m resolving my problems in justice.”