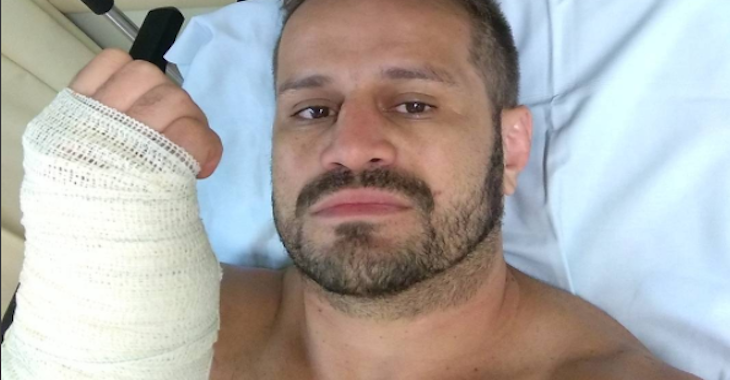 UFC veteran Fabio Maldonado is going to be out of action for a few months, as he was forced to take a trip to the hospital after a nasty accident

According to MMAFighting.com, this incident occurred in Maldonado’s home in Brazil, when he fell down the stairs, and over a glass door. Shortly after visiting a hospital in Sorocaba, Maldonado shared some images of this unfortunate incident on his Instagram account.

These images, which show both the wound he sustained on his hand, and the trail of blood he left on the floor as he wandered out of his home, can be seen below.

WARNING: The following images are gruesome and graphic!

“I had an accident and will undergo emergency surgery here in Sorocaba,” Maldonado wrote in the first of these posts (translation via MMAFighting.com). “I lost a lot of blood, but thank God I’ll be fine.”

In a subsequent statement attained by MMAFighting, the Brazilian elaborated that he cut an artery in his hand, and won’t be able to train or fight for several months.

“I cut an artery and underwent a quick surgery,” Maldonado told MMAFighting. “I’ll get it checked again in a week. I can’t (train or fight) for three months.”

Maldonado was last seen in the cage in March, when he scored a first-round win over Abdl-Khamid-Davlyatov in Tajikistan. This win separated the UFC veteran from consecutive losses to Quinton “Rampage” Jackson, Corey Anderson (which prompted his UFC release), Fedor Emelianenko and Mikhail Mokhnatkin. All of these losses came by decision.

His decision loss to Emelianenko was controversial enough that it was later ruled a draw by the Wold Mixed Martial Arts Association. Unfortunately for Maldonado, this was a merely symbolic move, as the Russian MMA Union, who sanctioned the bout, did not change the result.

The Brazilian is currently 22-12 in sum.

What do you think of this grisly injury sustained by Fabio Maldonado? Send him your well-wishes on social media!