Eddie Alvarez was widely expected to blow through Russia’s Timofey Nastyukhin in his ONE Championship debut, which occurred on the stacked ONE: A New Era card in late March. In the end, however, the former UFC and Bellator lightweight champion was stopped by his unheralded opponent in the waning moments of the first round.

Despite this setback, Alvarez remains focused on his ultimate goal: the ONE Lightweight World Title. He came to the Singapore-based promotion eager to add a new belt to his crowded trophy case, and he’s still confident he’ll achieve this goal.

After all, he lost his UFC debut, and very nearly lost his Bellator debut, before going on to win gold in both organizations.

“Look, I got the first one out of the way,” Alvarez said on the latest stacked episode of BJPenn.com Radio. “I lost, no problem. I did the same thing in the UFC [against Donald Cerrone] and I honestly almost did the same thing in my debut in Bellator. I got dropped terribly. My debut in Bellator against an Irish kid [Greg Loughran] that no one knew. I got caught pretty clean. I bounced back and got the win, but I’m not a big fan of my debuts, put it that way. So I got it out of the way, got it past me, and now I can go full on, go undefeated straight to the belt

“I go out there and I’ve given my all every time, but I think at every once in a while it’s good to take a loss and put the fire back in your belly, and I think it’s a good time to have that,” he added later. “Sometimes you need that fire to burn long enough to get to that World Title.”

For Eddie Alvarez, the road to the ONE Lightweight World Title leads through two-time champion Eduard Folayang, one of ONE Championship’s best established stars. The pair will meet at ONE: Dawn of Heroes in Manila, Philippines on August 2.

Alvarez is very familiar with Folayang, who also came up short at ONE: A New Era, tapping out to Shinya Aoki. The former UFC an Bellator champ appreciates the Filipino Wushu specialist’s fighting style, and is excited to share the canvas with him.

“He’s incredibly tough, incredibly durable,” Alvarez said of Folayang. “I understand the power of Wushu, because [some of] the guys I train with, Zabit [Magomedsharipov] and a lot of the Russians that come over to spar with us in [New] Jersey, they’re all from a Wushu background.

“So the art is for real, it applies very well to MMA. And I’m looking forward to the toughest Eduard Folayang.” 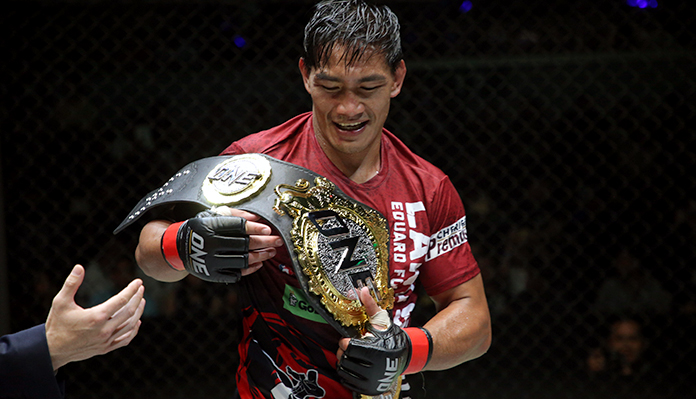 Folayang and his Team Lakay stablemates hail from Baguio City, far up in the mountains of the Philippines. In the capital of Manila, they will be welcomed as hometown heroes, which could conceivably have an affect on the judges watching their fights.

Eddie Alvarez is determined to score a finish to avoid any chance of a judging blunder on his foe’s home turf.

“It’s in his hometown,” he said. “So I’m looking forward to a tough opponent and I’m viewing the fight as one that I absolutely have to finish. I am not coming in for a decision. I expect to lose if it goes to decision. So I have every intention to finish.”

Although it almost goes without saying when discussing an Eddie Alvarez fight, all signs point to this matchup with Folayang being incredibly exciting — a fittingly riveting scrap in the setting of The Thrilla in Manila.

“I’m excited,” he said. “This match-up in particular, I feel like this guy’s such a hard-nosed, tough fighter. This could be a Fight of the Year. Just my attitude and my mentality going into the fight, I like to feel that my back’s against the wall. I do really well there. I don’t like to feel respected. I like when people think a certain way, whether it’s negatively or whatever, and then I get an opportunity to shock them all.

“This is going to be the ultimate one, the Thrilla in Manila. Going to the Philippines, fighting the Filipino king in Eduard Folayang and taking another head, taking another skull.

“I never want an easy fight,” he concluded. “My only desire is for the ONE Championship title. And this guy’s held it not once, but twice already.”

How do you think Eddie Alvarez will perform against Eduard Folayang?