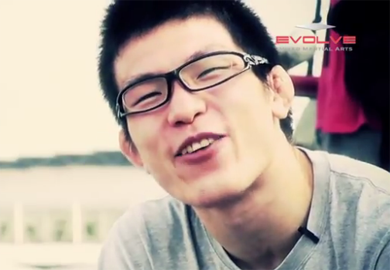 ONE FC Lightweight Champion Shinya Aoki (35-6 MMA) will make his first title defense this upcoming weekend in Dubai when he takes on Kamal Shalorus (9-3-2 MMA) in the main event of “ONE FC 19: Reign of Champions.”

BJPenn.com’s Chris Taylor recently caught up with Aoki to discuss his upcoming fight, as well as his future goals in the sport of mixed martial arts. Here is what the submission specialist had to say:

Taylor: First off, thank you for taking the time to do this interview with us Mr. Aoki. You are just days away from making your first ONE FC lightweight championship title defense against Kamal Shalorus. Tell us how familiar you are with your upcoming opponent and what it will take to defeat him on August 29 in Dubai?

Aoki: I am quite familiar with Kamal and I have a lot of respect for him both as a person and as a fighter. I’m looking to stick to my game plan that my coaches at Evolve MMA have planned for me and I know that the fans in Dubai can expect a really great fight between the both of us.

Taylor: At the “ONE FC 11” event in October of 2013, you made the drop to featherweight (145-pounds), which saw you successfully defeat opponent Cody Stevens. Have you considered going back down to the featherweight ranks or are you planning on remaining at 155-pounds?

Aoki: I didn’t feel too comfortable at Featherweight to be honest. However, I am extremely comfortable being in the Lightweight Division on the ONE FC roster and I’m definitely looking to have more fights here.

Taylor: Did you have difficulties cutting down to 145-pounds?

Taylor: You have fought in the United States of America on 3 occasions, twice under the Strikeforce banner and once for Bellator Fighting Championships. Can you talk about your experience fighting in the U.S. and if those prior fights had anything to do with you turning down a deal with the UFC?

Aoki: I’m honoured to have been able to fight in both Strikeforce and Bellator. However, I am also extremely honoured to be part of ONE FC, Asia’s largest MMA organization, and I plan to stay here for a really long time.

Taylor: Would you ever consider returning to the U.S. to fight for Bellator or maybe WSOF (World Series of Fighting)?

Aoki: No. I am really happy being a part of ONE FC and I can’t imagine myself anywhere else.

Taylor: Is fighting for the UFC completely off the table, forever?

Aoki: I’m happy with ONE FC and I feel great and honoured to be fighting for them so I intend to compete in the ONE FC for a really long time.

Taylor: What would an American based promotion need to do or offer in order to secure your employment?

Aoki: No one can sway my decision, I’m happy with ONE FC and I have no intentions on leaving the biggest MMA brand in Asia!

Taylor: Fair Enough. You have won lightweight titles in both DREAM and ONE FC. You have also held the Shooto welterweight belt. What are your goals going forward, both with ONE FC and MMA in general?

Aoki: My short-term goal will be to walk out of the Dubai World Trade Centre still the ONE FC Lightweight World Champion and definitely to keep that belt for the foreseeable future. For MMA in general, I would like to compete for as long as I can in ONE FC.

Taylor: Thanks again for the time Mr. Aoki, any last words from the Tōbikan Jūdan for your fans, sponsors or future opponent?

Aoki: Thank you for the interview BJPenn.com and I’m looking forward to competing in Dubai and represent the BJJ community there.

Be sure to catch Shinya Aoki defend his ONE FC Lightweight Championship against Kamal Shalorus on August 29 live from the Dubai World Trade Centre in the United Arab Emirates.

The entire event streams as an online pay-per-view in North America and can be ordered by clicking this link.