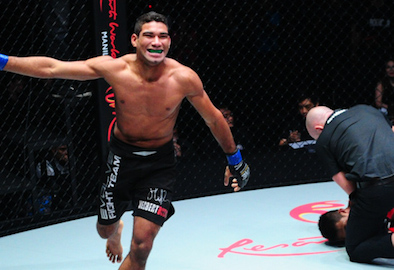 Former World “No Gi” Brazilian Jiu-Jitsu champion, Herbert “The Blaze” Burns (2-0 MMA, 1-0 ONE FC), will make his return to ONE Fighting Championships this March, when he faces  promotional newcomer Harris Sarmiento (36-25 MMA) at the “ONE FC: War of Nations” event in Kuala Lumpur, Malaysia.

Herbert recently spoke with BJPENN.com’s Chris Taylor about his upcoming bout, as well as his plans for 2014:

Chris: First off, how excited are you to get back in the ONE FC cage opposite opponent Harris Sarmiento this March?

Herbert: I am very excited. It’s another fight, another opportunity, I am looking forward to this fight and returning to the ONE FC cage! I believe this is going to be a good fight for me.

Chris: Your most recent effort saw you score another first-round submission victory over opponent Edward Kelly at the “ONE FC: Moment of Truth” event in December. Did the fight with Kelly go exaclty as planned?

Herbert: It never goes exactly as planned! However I always look for the finish and I am happy because it was one more fast submission.

Chris: This will be your second bout under the ONE FC banner. Do you feel any added pressure after securing back-to-back first-round submission victories and having people talk about you as one of the best upcoming prospects in MMA’s featherweight division?

Herbert: I am proud and happy to have people believe and say this about me. I am also thankful to ONE FC for giving me my ONE FC debut against Kelly in the Philippines. I don’t feel any pressure. I train hard everyday with many World Champions at Evolve MMA and every one here pushes me hard everyday. I’m continuously improving everyday. I will always go into the cage prepared to fight and finish as best and fast as possible. At the same time I will respect every fight and fighter for what it is and am prepared for any situation.

Chris: With both of your professional wins coming by way of submission and considering you are a former World Jiu-Jitsu champion, many fans are left to wonder about your stand-up game and how good it is. Can you talk a little about your training in striking?

Herbert: I train my striking with Muay Thai and Boxing World Champions such as Saenghirun Lookbanyai, Namsaknoi Yudthagarngamtorn, Orono Wor Petchpun and Dejdamrong Sor Amnuaysirichok everyday. They put me through various drills, padwork and sparring everyday. My striking is always improving. I am feeling much more confident now and in my place when I strike. I have excellent technical coaches and I am hungry to learn. I feel great.

Chris: Harris Sarmiento is a very well-travelled MMA veteran. How, if at all, are you preparing differently for an opponent with so much experience? I know you train at Evolve MMA so you must have a ton of experienced fighters helping you prepare for this bout.

Herbert: Every fighter needs to learn to adapt his game plan according to his opponent. I am aware of his strengths and am going in with a game plan accordingly. The Evolve Fight Team is supporting me a lot and pushing me to improve myself every single time during training. Heath Sims (Head Coach), Eddie Ng (ONE FC Superstar), Irshad Sayed (RUFF Bantamweight World Champion) and Bruno Pucci (BJJ No-Gi World Champion) are doing a lot to help me, pressuring me with different fighting styles and making me work harder all the time.

Chris: With a win over Sarmiento, do you feel you are getting pretty close to a shot at some of ONE FC’s most highly touted featherweights such as Shinya Aoki?

Herbert: I hope so, that is my goal. Every fighter wants to be a champion and be the best, but it is all about the ones that are ready to put in the work, dedication and commitment. I know I am. At this rate it is a matter of time and how I decide to act on my opportunities at the appropriate moment.

Chris: What are your goals for 2014 in regards to ONE FC? How many fights would you like to take part in?

Herbert: I would like to keep my undefeated status and continue to be challenged. I want to test myself as a fighter by learning new skills and facing tough opponents. I am eager to develop my MMA career. Mine is still fresh. I would like to fight as often as possible.

Chris: Lastly, what should fans expect from you and Sarmiento when you step in to the ONE FC cage on March 14?

Herbert: I will be prepared for war. Sarmiento is a tough fighter. We have completely different styles and skill set. We are bound to put on an intense and exciting performance at the ONE FC next month.

Herbert: Thank you to Evolve MMA for all of the support, a big thank you as well to my family and friends. To every one that has supported me, to the fans that appreciate and look up to me, thank you! You all make this so much more worthwhile.

The “ONE FC: War of Nations” event takes place March 14 live from the Stadium Negara in Kuala Lumpur, Malaysia. The Burns vs. Sarmiento is the headlining bout of the events preliminary card. (See the Full “War of Nations” Fight Card Here)