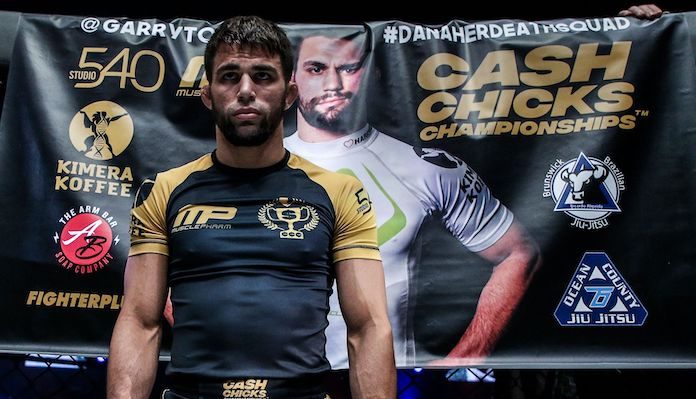 At ONE: HEART OF THE LION, which goes down on November 9 in Singapore, five-time EBI Grappling Champion Garry Tonon will look to improve to 3-0 in the mixed martial arts arena as he takes on South Korea’s Sung Jong Lee.

Tonon, as always, has done his research heading in to this fight. And having reviewed Lee’s tape, he feels there’s a good chance the South Korean will actually try to drag the fight to the mat — something that many other fighters would likely to find unthinkable, given Tonon’s incredible submission ability. Lee has submitted three of his six opponents (all with heel hooks), and Tonon believes he might look to do the same in Singapore.

“There wasn’t a crazy amount of tape on him, at least that I found,” Garry Tonon said on the latest episode of BJPENN.COM Radio. “Maybe I didn’t look hard enough but I saw like two fights. His most recent fight against Amir Khan and then there was something else with another organization and overall it just looks like he’s interested in getting things to the ground as quickly as possible. No matter what, really, it kind of just seems like he’s interested in grappling more than anything else. I’ve seen him throw a few punches and kicks here and there but anytime anybody puts any pressure on him, he immediately goes in, clinches, pulls guard, or tried to take the guy down.”

Given his and his opponent’s shared predilection for grappling and submissions, Garry Tonon feels it’s very likely this matchup hits the canvas early.

“I feel as though considering the two styles of each of us, I think it’s pretty unlikely to see this fight stay standing for very long,” he said. “If he jumps down to the ground like I see him do in some of his fights, like to pull guard, I’m not gonna back away from him and make him stand up. I mean I might passively move forward, I’m not gonna be an idiot about it, but I’m just saying, I have no intentions of just like, ‘oh yeah, let’s turn this into a standup fight.’ I don’t know, for me I’d rather just engage somebody on the ground. I mean I’ve been doing jiu jitsu for so long so why not? I’m not afraid.”

If Sung Jong Lee does attempt to take this fight to the mat, Garry Tonon believes he’ll make quick work of the South Korean.

“I just see him forcing it to the ground pretty quickly,” he said. “I see the fight ending, most likely, via TKO or submission in the first or second round. You never really know. I probably would have thought that of the last opponent [Rahul Raju] too, but it took three rounds [to submit him] so you never really know.

While Tonon is expecting this battle to unfold on the canvas, he says he won’t be disappointed if it doesn’t. The American BJJ icon is always looking for opportunities to collect mileage in the striking department, and he’d relish the chance to do so opposite somebody who isn’t known for their striking.

“I mean, hell, if he does stay standing for some reason ’cause he knows I’m good at jiu jitsu great. I’ll keep it standing I think,” he said. “I mean that would be great, right? Theoretically it would be easier to strike with somebody who’s primarily a grappler so it would be a good time to practice some of my skills with a little bit less danger. Not necessarily fighting a knockout artist or something like that.”

Do you think we’ll see Sung Jong Lee attempt to grapple with Garry Tonon at ONE: HEART OF THE LION this Friday in Singapore?