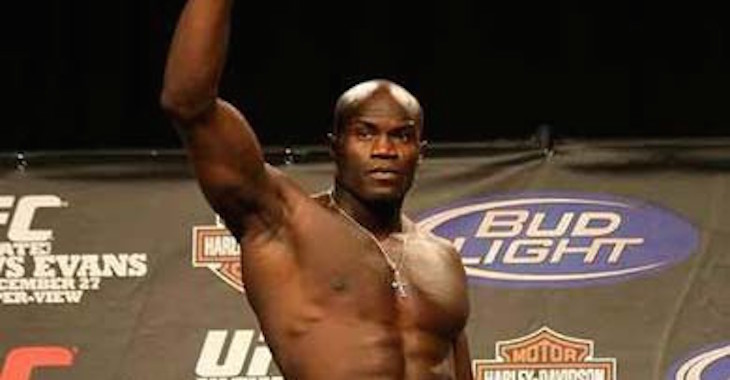 A heavyweight scrap between Cheick Kongo and Oli Thompson served as the co-main event of tonight’s Bellator 172 event in San Jose, California.

Round one begins and Thompson starts off quickly with a leg kick. Oli is utilizing a lot of movement early. He presses forward and backs Kongo against the fence. Cheick swings a misses with a leg kick. Oli goes to the body with a jab and Kongo circles out. Cheick with a left jab. He takes the center of the cage and then charges forward with a combination. Thompson counters with a nice left and then pushes Kongo up against the fence. Oli with some decent knees inside. The referee steps in and tells the fighters to break. Upon restart Kongo scores a quick takedown and begins working some ground and pound. Oli is trying to wall-walk but Kongo won’t let him. A big hammer fist lands for Kongo. Oli scrambles and is able to wall-walk and get back to his feet. Kongo has him in the clinch and lands some big knees before round one comes to and end.

Round two begins and Oli uses some forward pressure to get inside on Kongo and press him against the cage. He begins working some short shots from the position. Kongo is able to switch the position and begins looking for a takedown. He gets it. Kongo in half guard here. He begins working some short shots to the body of Thompson. Cheick with a nice right hand. He lands another. Thompson attempts to grab a leg but Cheick says no to that idea. Kongo with some big ground and pound now. He’s landing his right hand at will. Oli scrambles but cannot shake him. Kongo delivers some more hard ground and pound to close out round two.

Round three begins and Kongo quickly gets his hands on Oli and presses him up against the cage. He shoots down and scores an early takedown. Kongo immediately moves to full mount. This is not good for Thompson. Oli is able to scramble back to half guard. Kongo is landing some big shots from the top here. Oli is defending but cannot seem to better his position. Kongo continues his assault from the top. He once again moves to full mount. One minute remains in the fight. Kongo continues to throw punches from the top. Some to the body and now back to the head. Round three comes to an end.