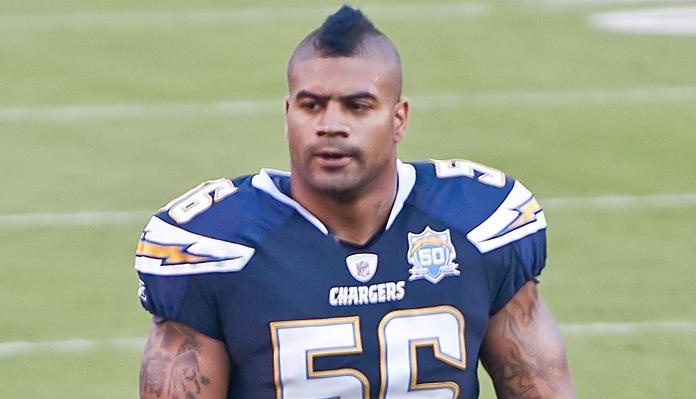 If you don’t think that the world of bare-knuckle boxing is trying to leave its mark, then guess again. Yet another high profile name is giving the gloveless fighting art a try.

After the World Bare Knuckle Fighting Federation’s announcement last month of the signings of Chris Leben and Phil Baroni to fight each other, they’re now continuing to add to their roster.

Coming as a bit of a surprise, the WBKFF announced today that they have signed former NFL linebacker Shawne Merriman. No date or opponent for Merriman’s combat sports debut has been announced yet.

A few years back, Merriman attempted to try his hand at professional wrestling but quickly gave up that endeavor after seeing how intense the training was. Which is kind of crazy considering that Merriman played at the highest level in American football.

Regardless, the now 34-year old Washington D.C. native has always had some sort of interest in combat and contact sports.

Merriman spent the first five years of his NFL career playing for the San Diego Chargers from 2005 to 2010 where he found most of his success before finishing his career with the Buffalo Bills in 2012.

“Right now, this is the best opportunity for what I want to do,” Merriman told ESPN, “I’ve been kicking tires for years, this is a good place for me to start. I’m looking forward to having some fun out there. I get to train for the next six to eight weeks and go show everyone what I can do.”

In addition to Merriman, Leben, and Baroni, the WBKFF has also recently acquired the likes of UFC veterans Tom Gallicchio, Josh Neer, Isaac Vallie-Flagg and Melvin Guillard who just this past Saturday fought Takanori Gomi at RIZIN 11.

“We are thrilled to have Shawne as part of our team,” said WBKFF CEO Tom Stankiewicz. “Shawne was a proven warrior on the field and we look forward to seeing him in the ring. We feel Shawne’s signing with WBKFF opens the doors to champions from all sports and shows that he has the guts and courage to step into this gladiator’s sport.”