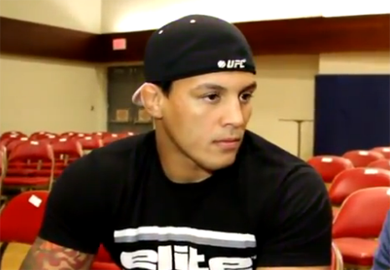 UFC Fighter Vinny Magalhães discusses who he would like to fight next in the light heavyweight division. With Phil Davis now facing Forrest Griffin at UFC 155, Vinny expresses interest in facing Matt Hamill Next. Magalhães also comments on his so called “history” with the Nog brothers and possibly facing Lil Nog as well. Vinny is a world class BJJ practitioner and is brought in by other fighter’s to help with their training on occasion. One of the fighters that Vinny trains is Chael Sonnen, who will be facing Jon Jones for the UFC light heavyweight title in April of 2013. Vinny is not impressed with Jones’ ground game and says it is “suspect.” Vinny is convinced that Chael can “submit Jones from his back.” Lastly, in a random and bizarre twist, Renato Laranja shoves UFC Fighter Vinny Magalhães and Vinny asks Dana to sign Renato, so they can fight in the UFC.