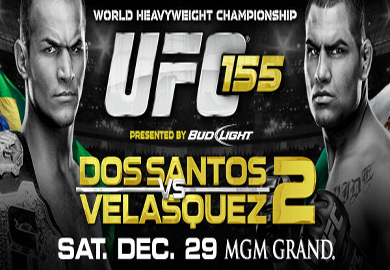 On Saturday, Dec. 29 at the MGM Grand Garden Arena in Las Vegas, the Ultimate Fighting Championship closes 2012 with a bang, as UFC heavyweight champion Junior dos Santos meets former champion Cain Velasquez in a long-awaited rematch between two of the sport’s hardest-hitting competitors.

Dos Santos (15-1, fighting out of Salvador, Bahia, Brazil) ended Velasquez’s reign as heavyweight champion last November, knocking out the two-time Division I All-American wrestler in the first round. Now, the 30-year-old Velasquez (9-1, fighting out of San Jose, Calif.) seeks revenge in arguably the biggest rematch in UFC history.

“Cain is on a mission to get the belt back and avenge the only loss of his career,” UFC President Dana White said. “He wants to prove that he’s still the best heavyweight in the world. But Junior is one of the hardest-hitting fighters ever and he proved that by knocking out Cain and Frank Mir in back to back fights. This is the perfect fight to end 2012!”

In addition to the heavyweight title rematch, former light heavyweight champion Forrest Griffin meets former Division I national champion wrestler Phil Davis in a pivotal 205-pound contest. Griffin, winner of season one of The Ultimate Fighter®, defeated Tito Ortiz in a trilogy bout in July. Now he collides with Davis, who is fresh off a brilliant submission victory over Wagner Prado at UFC 153.

UFC 155 also features surging middleweight star Chris Weidman (9-0, fighting out of Mineola, N.Y.) taking on Tim Boetsch (16-4, fighting out of Sunbury, Pa.) in a fight that will push the winner toward a 185-pound title shot. Weidman scored a first-round TKO of top contender Mark Munoz, while Boetsch snapped Hector Lombard’s five-year, 20-fight winning streak by defeating the Cuban in July.

If that wasn’t enough, Gray Maynard (12-1-1, fighting out of San Jose, Calif.) faces submission ace Joe Lauzon (22-7, fighting out of Bridgewater, Mass.) in a bout between two of the lightweight division’s top contenders. Maynard defeated Clay Guida in his last fight in June, while Lauzon earned another Fight of the Night award in August with a thrilling win over Jamie Varner.

Additional bouts for UFC 155 will be announced in the days to come at www.ufc.com.

Tickets for UFC 155: DOS SANTOS vs. VELASQUEZ 2, presented by Bud Light, go on sale Friday, Oct. 26 at 10 a.m. PT and are priced at $800, $600, $400, $250, $125, and $75. Tickets are available at all Las Vegas Ticketmaster locations (select Smith’s Food and Drug Centers and Ritmo Latino). Ticket sales are limited to eight (8) per person. To charge by phone with a major credit card, call Ticketmaster at (800) 745-3000. Tickets also are available for purchase at www.mgmgrand.com or www.ticketmaster.com. Tickets are subject to convenience and service fees.

UFC Fight Club members will have the opportunity to purchase tickets to this event Wednesday, Oct. 24 at 10 a.m. PT via the website www.ufcfightclub.com. A special Internet ticket pre-sale will be available to UFC newsletter subscribers Thursday, Oct. 25 starting at 10 a.m. PT. To access this presale, users must register for the UFC newsletter through UFC.com.