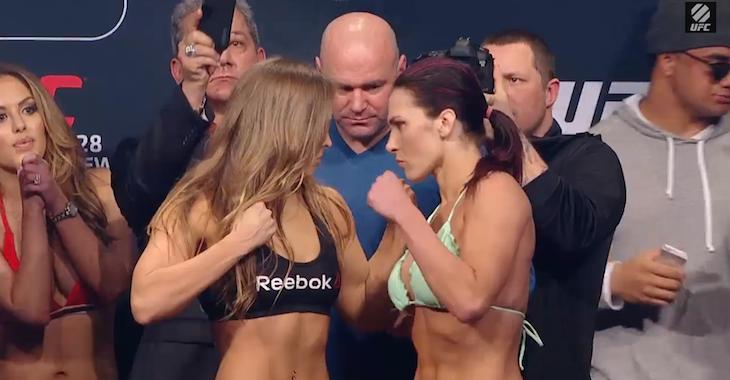 Cat Zingano has been sitting on the sidelines since her last appearance in the octagon when she lost to Ronda Rousey in just fourteen seconds at “UFC 184”. Zingano didn’t have the opportunity to stand and bang with the champion like she wanted to, but she felt the force and pressure she can bring to a fight. “Alpha” Cat also knows that fans shouldn’t be quick to dismiss UFC 193 title challenger Holly Holm as they have trained together before and knows she packs dynamite in her fists.

“I’ve sparred with Holly before, and she has super heavy hands,” Zingano told UFC.COM. “She’s fast and she’s calculating. If Holly can keep it standing, she’s got some weapons there.”

While Holm can surely pack a punch, the odds are heavily stacked against her. Rousey has been one of the most dominant champions in the history of the company as she hasn’t been in a match that has lasted longer than a minute since February 2014 at “UFC 170″. Her fight with Sara McMann lasted just one minute and six seconds.

Zingano truly believes that Rousey will test herself against the elite striking skills of Holm, though. If Rousey can do this, she will prove to the naysayers that claim her standup as devastating as some think.

“I see Ronda testing herself. I can see her wanting to stand up to that challenge. If I were fighting a stand-up fighter, I would set myself some goals in the match to see what happens,” Zingano said. “I would want to beat them at their own game. I don’t know if Ronda is that way or not, but if I were fighting Holly, how much more awesome would that be to win the fight beating someone at what they’re good at?”

Regardless of who wins, Zingano will be waiting for the winner. She doesn’t care to make a prediction right now. “As soon as I know, everyone will know,” she said. “I want to go into my next fight good and happy and balanced. That’s when everyone’s going to see me being the best fighter I can be.”

Who do you think will walk out of the octagon with their hand raised when Rousey and Holm meet at “UFC 193” on November 15th? Share your thoughts in the comment section below!