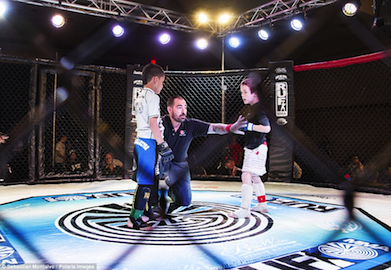 Even though it’s the fastest growing sport in the world, and despite airing events on networks like FOX, mixed martial arts is still in its infancy stages. The media and non-fans watch the action from the outside of the realm of understanding and view it as barbaric; a sport that does more damage to the fabric of mankind than good. The sport of MMA may not be for everyone and is still a hot topic in America.

So, when a reporter submits an article displaying the brutality of the “kids’ MMA” event they thought they attended instead of the “Children’s Amateur Pankration” that actually took place, the ignorant mass media will jump on the story faster than Rousimar Palhares on a leg.

Ignorant people who are quick to label pankration as “brutal” simply because two children are punching and submitting each other would benefit from being walked through the fundamentals of the sport.

Amateur Pankration is a combat sport that combines multiple disciplines of martial arts into one sport but is not the spectacle that you see on television. It is an amateur form of mixed martial arts that highlights safety and sportsmanship. Dangerous aspects of MMA like knockouts are prohibited in Pankration as strikes to the head are illegal.

Even though many of the techniques used within MMA and pankration are similar, the purpose is different. Pankration utilizes a scoring system that rewards students who use proper technique and punishes those who fight with intent to hurt their opponent.

Media outlets are picking up on the hot-button topic of children fighting and are releasing stories that are near-slanderous to the individuals who organize the children’s pankration events. One video even mentioned that “kids’ MMA” is fast and furious while airing footage of a youth pankration fight under the United States Fight League (USFL) banner.

USFL President Jon Franks is tired of news outlets misleading the masses, making them think that his events are “Kids’ MMA” fights. In a recent interview with BJPENN.COM, Franks told us, “Just yesterday they did a news story in Phoenix about an event we did in Parker, Arizona. They found, on YouTube, an event of kids MMA from Armenia and they dubbed that in, making it look like it was our event.”

Franks continued to explain that it wasn’t only local news stations that were slandering him, but bigger companies like ABC News as well. “I was contacted by Chris Murphy of ABC News and he wanted to do a story about girls who were competing in jiu-jitsu, pankration and MMA and stepping out of the cheerleading role. I found two really good girls who were Straight-A students and he covered their match. He totally threw us to the wolves.”

A recent post from DailyMail ran a photo-gallery of images depicting the gloomy side of children’s combative competition. Many of the images would lead one to believe that the children are suffering and sad. One specific image depicted a young boy crying because he lost the tournament. When asked about the misleading image gallery, Jon Franks replied, “They cried because they lost.” One of sport’s most iconic images displays Arizona Cardinals full back Terrelle Smith crying after losing the Super Bowl in 2008. Losing is a difficult concept to grasp even in adulthood.

Jon Frank elaborated, “Kids are trained to understand they cannot win by hurting their opponent and any technique that has a reasonable chance of inflicting injury is prohibited. All this has a positive social side effect by giving these kids a unique understanding of how to compete in a combative sport while ensuring they don’t hurt their opponent. No other sport creates this type of empathy.”

When talks of the children suffering injuries like broken bones and concussions arise, Jon Franks has the documents to prove that pankration is a safe sport for children to participate in. USFL competitions will always have a trained medical official on site, whether it be a doctor, paramedic or a certified athletic trainer that meets standards.

From 2011 to May 2013, the medical officials of USFL collected statistical health reports. Out of an approximate 1,059 athletes (844 children, 215 adults) only 59 injuries were treated on scene. 48 of those injuries did not require follow up treatment. 10 students were recommended for non-immediate follow up care and only one adult needed emergency care for suffering a dislocated elbow.

Pankration promotions take many precautions to avoid injuries and long-term effects on the fighters. Techniques such as heel hooks and slams to escape submissions are prohibited. Certain promotions will hold same-day weigh ins which encourages children to fight at their natural weight.

Many of football’s biggest stars played football from the moment they could walk. Safer versions of the sport like “Pee Wee Flag Football” is a way for future potential stars to be introduced to the sport. It teaches them the fundamentals of the game and makes the transition to youth football in public schools much easier.

Pankration is an extremely safe way to introduce young children to the sport of mixed martial arts. It’s a way for future MMA stars to gain the fundamentals in a safe environment while learning many important life lessons.

How is this any different from Pee-Wee football?