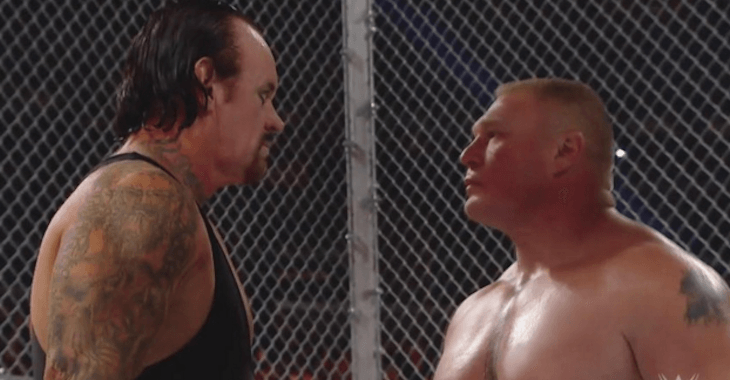 Former UFC Heavyweight Champion Brock Lesnar made his return to the world of professional wrestling years in 2012 after he was forced out of mixed martial arts due to diverticulitis. The crippling disease forced Lesnar to fight nowhere near his full capabilities in the octagon and ultimately forced him out of the sport after Alistair Overeem brutally knocked him out with a body kick.

Since returning to the squared circle, Lesnar has become more of a spectacle than your dime-a-dozen main event pro wrestler. Some view him as the final boss of a video game where he can take an unrealistic amount of punishment and remain unfazed, ready to dish out punishment of his own. The only person to bring him to the brink of defeat was future WWE Hall of Famer The Undertaker.

The trilogy started when Lesnar ended The Undertaker’s streak at Wrestlemania 30. It would take Undertaker nearly one year for him to gain revenge at Summerslam when he low blowed Lesnar twice before making him pass out in the Hell’s Gate. Tonight will be their final meeting with each other before moving on to other opponents.

Tonight, both men spilled blood in the main event of “WWE Hell in a Cell” in a bout that left the live crowd in attendance on their feet. It resembled a fixed mixed martial arts match at the beginning of the match, but quickly turned into your traditional pro-wrestling brawl within minutes.

Chairs and stairs were utilized by both men to weaken each other for fifteen minutes before they made their way to the final sequence of the match. Lesnar tore the ring up and exposed wooden planks where he planned to crash Undertaker’s skull into during the F5.f

Undertaker quickly turned the tables, however, and nailed Lesnar with a chokeslam on the planks. He picked Lesnar up and followed up with a Tombstone Piledriver; Lesnar looked to be going down for the three count but he unexpectedly kicked out!

Undertaker postured over Lesnar, taunted the “Beast Incarnate” and ate a low blow! Lesnar used Undertaker’s own tactics against him! Lesnar nailed him with an F5 and that was that— Undertaker tasted defeat for the second time!