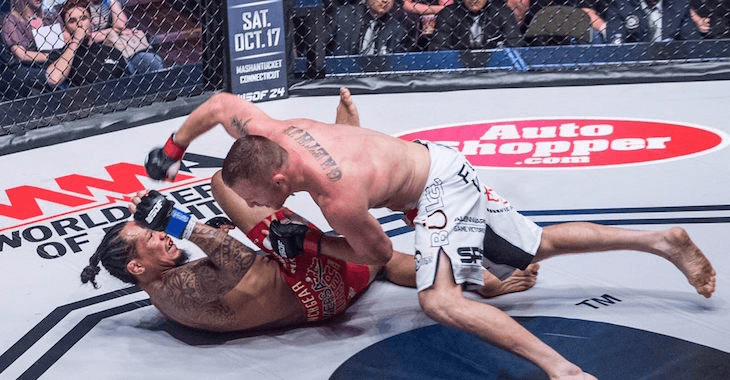 World Series of Fighting took over the world of mixed martial arts last Friday with another exciting card in the form of “WSOF 23: Gaethje vs. Palomino 2”. Gaethje once again proved he was the most dominant champion in the promotion by sending Palomino down to the mat with a brutal combination, followed up by several shots that forced the referee to stop the fight.

“I feel like I’m on top of the world. I gotta be honest with you,” Gaethje told MMA Fighting. “I don’t remember much of the fight, just like every fight I’ve been in.

Gaethje has never been one to hold back and hide his confidence; The lightweight champion is ready to defend his title against the best in the world. “I’ve trained my whole life. Since I was four years old, I’ve trained to do this, and I’m ready. I’m as ready as anybody will ever be. You step in the cage with me, I don’t care if you’re No. 1 or No. 10 in the world, you will have a fight on your hands.”

It was announced that his next challenger will be decided in a lightweight tournament where the favorite Brian Foster has already called the champion out. Foster landed a thirty-two second knockout at the event on Friday and proceeded to call the champion out.

“I still don’t think any of them could beat Palomino. That’s a tough dude right there,” Gaethje said of the contestants of the tournament. “He’s worked so hard for so long. But yeah, if any of those guys want it, I’m obviously right here. I don’t get to pick and choose and I don’t want to pick and choose. I want whoever thinks they’re ready, whoever thinks they’re capable.

Of course, Gaethje went on to target Foster as well. “I want to get paid again, so let’s bring it. Brian Foster says he’s sending chills down my spine? I’ll f**k him up if we fight. Plain and simple. I don’t give a s**t (about the tournament). I’ll fight him in December, right before Christmas.”

Who do you think would win in this lightweight clash? Share your thoughts in the comment section below!