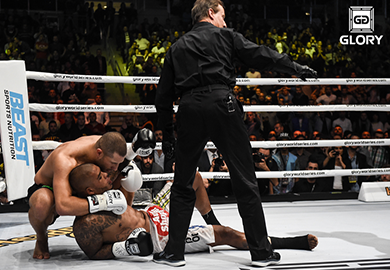 One of combat sport’s most gifted athletes suffered a major setback on Saturday night.

World Series of Fighting and GLORY fighter Tyrone Spong was set to face Gokhan Saki in the finals of the light heavyweight tournament on Saturday night. Just over a minute and a half into the first round, Spong threw a leg kick which was checked by Saki. In similar fashion to Anderson Silva’s injury at UFC 168, Spong’s shin shattered and he collapsed to the ground in pain. Saki would be declared the winner, but he showed great sportsmanship in showing more concern for his opponent than his prize.

Cor Hemmers, Head of Talent Operations at GLORY, stated the following on Spong after the event: “Our thoughts are with Tyrone and we wish him a speedy recovery. At this stage, we don’t know exactly what the damage to his leg is. We had ambulances on standby and Tyrone was taken to one immediately from the ring, and from there to the hospital. We are waiting for updates from the hospital.”

Gokhan Saki continued to show class in post fight interviews. When asked what he said to Spong after the bout, he replied, “I told Tyrone how much I respect him and how I am sorry how the fight ended and that he got injured that way. Tyrone is a real warrior and I have a lot of respect for him, so of course when he is back I think he will be challenging to be champion again.”

Anderson Silva has posted inspirational videos and pictures on his Twitter account displaying how he has been recovering from a similar injury. We here at BJPENN.COM hope to see a similar, if not quicker, recovery from Tyrone Spong.