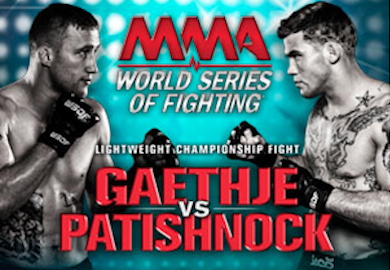 If you can’t make BJPENN.COM’s live broadcast of today’s event, or just want to catch up on the results, you can tune in right here for our live main card play-by-play.

Round 1 – They didn’t waste any time with this. Patishnock lands a hook as Gaethje bounces off the cage but Gaethje recovers quickly and CLOBBERS Patishnock with some hard shots. Gaethje lands a left hook and a knee and Patishnock falls down. Gaethje is now teeing off on him, landing elbows and knees to the body. Spinning back fist lands for Gaethje. He kicks Patishnock’s leg out from under him and trips him. Richard gets back up. Gaethje pushes him against the cage and is teeing off again. Patishnock is standing but isn’t blocking and isn’t punching back. The referee stops it after giving Patishnock plenty of time to recover. Game over, Gaethje wins.

Round 1 – With a touch of the gloves, we are underway. Johnson lands a straight kick to the gut. Johnson lands a high kick, but it barely landed. Maybe his toes connected. Johnson hits a leg kick. Kyle is being very careful. Quick jab from Johnson. Kyle looks for a takedown but fails. Johnson is now pressed against the cage. Kyle is kneeing his knee. Kyle lands a quick left hook as he separates. Johnson is clearly the aggressor. Kyle goes in for a combo but Johnson cuts him off with a strong left hook! Kyle is out before he hits the ground and is out cold. Kyle dives on top of him and lands one more bomb before the referee pulls him off.

Round 1 – Aguilar goes for a quick takedown but fails. She had Gray’s back and drags her down. She’s on her back and is staying very busy. Gray is back off her knees and is now pressed against the cage. Aguilar trips her down and is in half guard. Aguilar is punching the body and is looking to transition but fails. Aguilar is looking for a clock choke and transitions to the other side of Gray’s body. It’s over. Gray taps out and the fight is over in round one.

Round 1 – Bollinger’s high kick is blocked. Nam lands a leg kick. Nam peppers him with a soft right hook. Bollinger clamps on a muay-thai clinch and lands four knees. Two of them landed flush. Nam pushes off and is a bit hesitant to get within Bollinger’s striking distance now. Bollinger hits a jumping knee to the sternum of Nam. They’re both throwing some shots but they’re all missing. Nothing big lands for over a minute. They’re both careful. Nam lands a leg kick as Bollinger overthrows a hook. Nam lands a right hook and Bollinger says it didn’t effect him. Bollinger lands a right uppercut but misses his follow-up left. Bollinger looked like he got dropped but after a quick rewind, he loses his footing as he falls down. He turtles up, recovers and stands back up. They’re back in the middle of the cage, carefully throwing shots. 10-9 Bollinger

Round 3 – Bollinger’s right hook is blocked. Nam pops Bollinger with a right hook but it does nothing. Nam is blocking all of Bollinger’s punches now. He should turn up the pace and try and land some punches on Bollinger. Bollinger misses another spinning back kick. They’re circling the decagon and they’re throwing punches but nothing is really landing. The crowd is booing them. Bas is talking about how nobody deserves a title shot from their performances. Ten seconds left and only four strikes were thrown in that time. With this close of a fight, they both should have thrown fifteen altogether. 10-9 Nam

Round 1 – Patino lungest forward with a jab but misses. Palomino lands a nice left hook. Palomino lands a jumping straight kick to the gut of Patino but gets taken down after. Palomino is on his back now, and Patino is towering over him. Patino can’t break Palomino’s guard and cannot transition as a result. The referee may stand it up. He threatens four times. Maybe he’ll never stand them up. He finally does and they’re in the middle of the decagon. Palomino misses a spinning back kick. Patino counters with a right hook. They’re whaling punches without looking. Palomino is cracking Patino with punches now! He’s a little wobbly. It looks like it should end but Patino withstands the punishment and takes him down. Patino tries to lock in a guillotine but it’s more of a neck crank. Palomino survives it and escapes the first round. 10-9 Patino