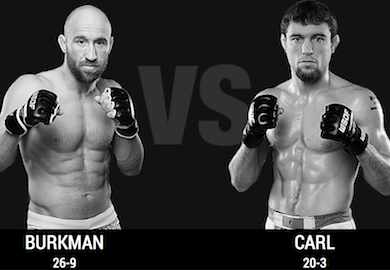 In the main event, the inaugural World Series of Fighting welterweight belt was on the line. Josh Burkman took on Steve Carl in a highly anticipated matchup.

A back and forth war between Steve Carl and Josh Burkman took over the WSOF 6 card.

In the first round, both men found success in their takedowns while neither man established a game plan.

The second round, saw Burkman take control of the striking and the ground game, working on passing Carl’s guard and working submission attempts.

Both men slowed considerably in the third while their standing strikes seemed labor. They traded reversals on the mat, however, leaving both men in trouble. The end of the fight looked to be near yet both men used their heart and will to make it out of the third and in to the championship rounds.

The final round saw Burkman reversing a takedown of Carl. Carl was able to land a loose triangle that he eventually tightened up. Burkman tapped but the referee failed to separate the two, allowing Burkman to go unconscious. Steve Carl becomes the first ever World Series of Fighting Welterweight Champion with this win