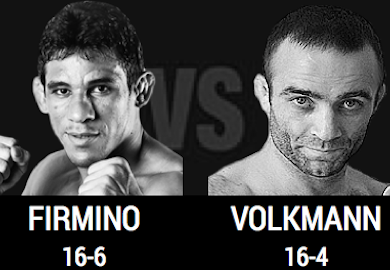 UFC veteran Jacob Volkmann returned to the WSOF to take on Luiz Firmino. The bout was one in which Volkmann believed would play to his strengths.

Volkmann looked to implore his usual grinding and overwhelming attack in round one. A game Firmino however was able to match Volkmann’s raw strength however and gave Volkmann problems both on the feet and in the form of several takedowns.

Round 2 started with Firmino immediately shooting, and attaining a takedown. Volkmann worked his way back against the cage in an attempt to find his way out. Once on the feet Firmino stayed aggressive and urgent while also being acutely aware of the takedown attempts of Volkmann.

Volkmann struggled to control Firmino while Firmino seemed to be able to move Volkmann around. Volkmann looked extremely uncharacteristic while being controlled on his back, unable to answer the top pressure being applied by Firmino.

Firmino controlled round 2 and placed Volkmann in a precarious situation going in to the final round.

Volkmann fought hard to escape another early takedown in the final round, ending up in a reversed back control. Firmino was able to slip around Volkmann’s defense though and ended up on top once more.

Firmino looked absolutely dominant over Volkmann who looked to be frustrated more and more as each second passed.