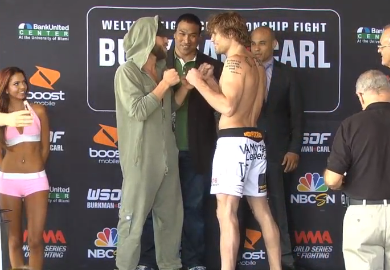 Today is an MMA doubleheader on BJPENN.COM. Following today’s UFC Fight Night 30 event will be our full coverage from Miami Florida of ‘WSOF 6: Burkman vs. Carl.’

You can tune in here to catch our live stream of the event. (It’s free and airs prelims to the U.S. and the full card to international audiences.)

If you just want the round-by-round and blow-by-blow updates in our traditional live play-by-play than enjoy that aspect of our coverage below: (note: play-by-play only provided on main card.)

Round 1: Lauzon and Gaethe started out as expected, violent. Gaethje found his range quickly and landed shots on Lauzon wish a complete disdain for a counter. Gaethje landed much harder shots including a flush spinning-backfist. Lauzon stuck with it, took a few leg kicks and tried to climb himself out of the early whole. Lauzon started to find his rhythm also and opened up a bit on the feet. Gaethje’s strike were much more crisp though and he scored serious points for the first half of the opening round.

Gaethje found success with leg kicks as he did in his previous fight. Lauzon felt the effect of those kicks, limping around the cage as Gaethje chased him around and threw leg kicks over and over on the injured right leg of Lauzon. Lauzon was able to make it out of the first while checking the kicks dramatically to avoid any more pain.

Round 2: Gaethje stuck to his game throwing leg kicks early on. Lauzon looked to have gotten some sensation back in his leg and took more confident steps as he circled away from Gaethje. Lauzon showed incredible heart and threw back at Gaethje but Gaethje was just the fresher fighter. Gaethje decided to end the fight in the opening minutes of round 2, landing a huge right hook counter then a right uppercut to put Lauzon out, leading to a hard collision between Lauzon’s head and the mat.

Official Decision: Justin Gaethje defeats Dan Lauzon via TKO (strikes) at 1:40 of Round 2.

Round 1: Jon Fitch looked to rebound under the World Series of Fighting banner as he took on Marcelo Alfaya. Fitch, surprisingly was taken down first from a stiff double-leg up against the cage. Alfaya looked confident on top and worked to pass guard continuously. Alfaya spun to Fitch’s back as Fitch tried to reverse the position. Alfaya threatened with a rear-naked choke as one of Fitch’s arms were trapped in the body triangle of Alfaya.

Fitch stayed calm and got his arms free. Fitch postured up with Alfaya on his back with a reengaged body triangle in. Fitch slammed Alfaya on to his back still in the same back control position as mentioned before. Alfaya began to throw hammerfists from back control on to Fitch but they served more as point-padding than anything significant.

Round 2: Fitch opened up early, dropping Alfaya with a short shot. He then dragged Alfaya to the mat and battered him with his patented style. Alfaya was able to get back to his senses and landed a clean takedown and immediately took Fitch’s back once more. Fitch escaped much easier this time, spinning his body around and breaking the hold Alfaya held on his body. Alfaya took control in the clinch, holding Fitch in place. Fitch sprawled nicely, on the next takedown attempt, yet Alfaya kept his hold on Fitch’s waist.

Alfaya held on until finally he lifted Fitch and slammed him to the mat. Alfaya took Fitch’s back again but a fresher Fitch slipped right out and landed a hard uppercut when they got back to their feet. Fitch used improved punches to land a nice body shot and nice combinations in a show of his boxing technique. Fitch was able to push Alfaya off much easier now as Alfaya was red and on his way to gassing. The round ended with an exchange of shots with Fitch getting the better of each.

Round 3: A close fight was brought to the third and final round. Fitch again used much improved boxing to pick his shots and slip danger on a much slower Alfaya. Fitch started to unload with one-two combinations, firing on both. Fitch took complete control in this round. Fitch’s physical presence came forth in this round two, dragging Alfaya around and defending against takedowns. Alfaya shot in on a deep double leg on Fitch, who separated his legs wide to avoid it long enough to break free.

Upon an awkward collision, Alfaya fell to his back with Fitch following after. Fitch dropped hard shots on Alfaya in an attempt to finish the fight. Alfaya escaped and shot in on another deep double-leg and attained the takedown momentarily, until Fitch reversed him and took top control to finish out the fight, Alfaya slowly climbing to his feet.

Round 1: Beebe came out swinging as a brawl ensued. Moraes stayed patient and threw back, both men hitting one another with huge shots. Beebe wouldn’t back down and sprinted towards Moraes as he swung haymakers. Moraes was able to create just enough space and and moved back to entice Beebe to come forward. Beebe ran towards Moraes but was stiffened by a counter right hand. Moraes followed it up with one more shot to solidify his win.

Official Decision: Marlon Moraes defeats Carson Beebe via TKO at :32 of Round 1.

Round 1: The inaugural WSOF welterweight title was on the line in the main event of WSOF 6. Two streaking welterweights came to battle as Josh Burkman and Steve Carl squared off in the biggest fight of their careers.

A timid start by both men. Burkman started throwing more, mixing up his shots with kicks and punches while changing levels. Carl went for the first takedown after catching a kick from Burkman. Burkman stayed active in the clinch and spun around to put Carl up against the cage Burkman hoisted Carl up and slammed him to the mat. Carl got up quickly, yet remained in the clinch of Burkman. They separated and resumed the striking game.

Carl was hit hard on a counter after throwing a head kick but still shot in for a takedown. Burkman reversed him and got a takedown of his own, though, his second of the fight. Burkman kept heavy pressure on top and passed to the half-guard of Carl. Carl slipped back in to full-guard as Burkman postured up and threw a big shot back down on to Carl’s head. Burkman worked his top game and was nearly caught in a toehold but slipped out and landed in side control, on top of Carl.

Round 2: Burkman threatened early with a guillotine attempt on a diving Carl. Carl escaped but was followed back, letting Burkman in to his full-guard. Burkman allowed Carl to stand back up shortly after. Carl started to press forward now with Burkman waiting to counter. Carl resorted back to a takedown any chance he could. Burkman was finally taken down midway through the second round. Carl threw several choke attempts that Burkman stuffed although in defending the choke, he gave up full-mount to Carl. Carl started to drop heavy hands on to Burkman who sought a clean escape from the bottom. Carl stayed active and seemingly took round 2 after a controlling top game.

Round 3: Both men came out in this round having slowed a bit since the start of the fight. Burkman threw another guillotine attempt but couldn’t sink it in. Carl stuck to Burkman like glue and eventually was able to trip him up and get the takedown. Carl got in to full-mount and looked for openings anywhere he can find them. Carl sunk in a rear-naked choke that seemed to signal the end but an ever dangerous Burkman escaped the choke and fought back to his feet. Burkman again looked to grab that guillotine choke.  Burkman used a tight guillotine to sweep to full-mount on Carl with a minute remaining in the round. Burkman felt content to hold top position.

Carl got out but only for a minute as Burkman attacked with three more chokes to end the round in control.

Round 4: Carl landed a quick takedown but was reversed to the bottom. Carl held on to a loose triangle until he was finally able to sink it in. Burkman tapped yet the referee didn’t separate them immediately, allowing Burkman to go to sleep.