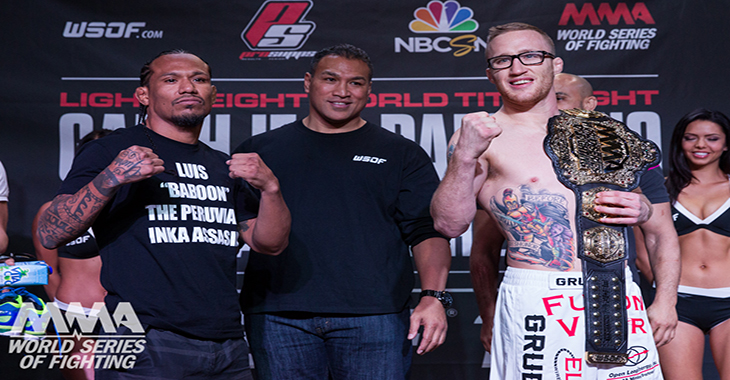 Holder Upset Silva and Advances to Finals of Tournament…
Teddy Holder def. Thiago Silva by way of TKO (Strikes) 2:00 of Round 1
Holder pulled off the upset of all upsets tonight by knocking Silva out in the first round. The fight was made so late there were no official odds, but I can guarantee you it would have been the biggest upset of 2015. Holder was knocked down earlier on in the fight but came back to return the favor when he knocked Silva down with a big right hand. Holder followed him to the mat and blasted off a couple shots which restricted Silva from fully recovering. Eventually, Silva was ate five shots too many and the referee stepped in to wave it off.

Gaethje Successfuly Defends Title in FOTY Candidate…
Justin Gaethje def. Luis Palomino by way of TKO (Strikes) 3:57 of Round 3
It is okay to be a fan of just the Ultimate Fighting Championship, but fans of the sport of mixed martial arts were treated to something special tonight when the main-event rolled around. Gaethje and Palomino put on one of the best title fights in World Series of Fighting history and it was easily the most exciting fight of the weekend. Gaethje lit Palomino up with leg kicks which eventually led to the end of the fight, but in between leg kicks these two were throwing bombs that were landing. By the time the third round started, both men were cut up badly. Tired of getting hit, Gaethje went back to the leg-kick gameplan and dropped Palomino twice in the third with leg kicks. The second knockdown was the last as Gaethje followed Palomino to the canvas and finished the fight there.