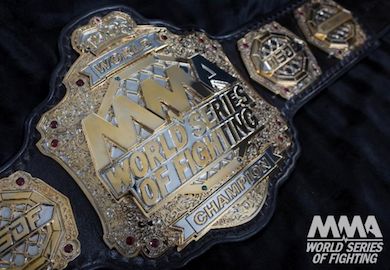 On Saturday night, World Series of Fighting crowns its first-ever champion, and today the promotion revealed the prize for which they’ll be competing.

Custom-designed by A.J. LaFons, the World Series of Fighting championship belt features more than 43 carats of genuine ruby, diamond, emerald, sapphire and red garnet and weighs in at a total of 10 pounds, 7 ounces.

The two-tone effect on the plates was accomplished by nickel-plating each layer of the details before gold-plating the highlights by hand.

“We wanted to make sure our championship belt was reflective of our commitment to excellence,” World Series of Fighting President Way Sefo said. “We’ve been working in the background for more than a year on the design of this belt, and we feel like we got it right. On Saturday night, I feel confident that either Josh Burkman or Steve Carl will be proud of the belt they receive as recognition of their accomplishment as our first-ever welterweight champion.”

A former master model maker for Jostens, LaFons had never before designed a championship belt. However, a self-professed MMA fan, he lobbied World Series of Fighting executives for the opportunity to commission the company’s first title. While he admits it it was even more of an undertaking than he initially imagined, LaFons said the opportunity to unveil the belt to the World Series of Fighting athletes made it all worthwhile.

“These fighters all tell me that the thing they live for is this belt, so I wanted them to all love it,” LaFons said. “Every one of them that got to see it today loves it. They’re all looking forward to winning one, so that made me feel good.”