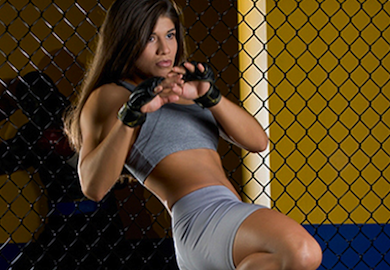 The World Series of Fighting has announced that top-ranked female fighter at 115 pounds, Jessica Aguilar (16-4), has signed a multi-year deal with the Las Vegas-based fight promotion and will make her debut appearance in the decagon in early 2014.

Aguilar is currently the No. 1-ranked fighter in the world at 115 pounds by the Unified Women’s Mixed Martial Arts Rankings.

“I’m very proud to be making history, being the first female fighter to sign with the WSOF,” said Aguilar. “It’s an honor that they chose me to be the face of their female division.”

The 31-year-old Aguilar currently boasts a seven-fight win streak that includes two wins over former top pound-for-pound fighter Megumi Fujii. “Jag” is 11-1 in her past 12 fights and owns seven career wins by submission, as well as another two by knockout.

“I just can’t wait,” Aguilar said. “I’m so hungry and eager to get into that cage and show everyone what I can do and why I am the best in the world.”

Additional information on Aguilar’s World Series of Fighting debut, including her opponent, will be announced shortly.