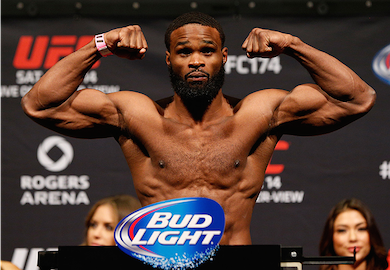 Woodley was most recently seen in action earlier this month at UFC 174 in Vancouver, where he suffered a lopsided defeat to Canadian welterweight standout Rory “Ares” MacDonald. Prior to the loss, “T-Wood” had put together back-to-back wins over former title challengers Carlos Condit and Josh Koscheck respectively.

Meanwhile, Dong Hyun Kim will be looking to stretch his current win streak to five in a row when he faces Woodley in Macao this August. Kim was most recently seen in action at the “Ultimate Fighter China Finale,” where he scored a third-round spinning back-elbow knockout over his opponent John Hathaway. The victory earned the Korean a “Performance of the night” award, which marked his second in as many fights, as he had previously earned “Knockout of the night” honors for his KO victory over Erick Silva in October of 2013.

Who do you have winning this key welterweight bout? Sound off Penn Nation!