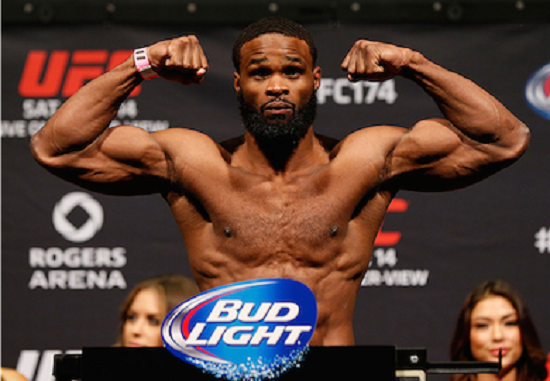 Tyron Woodley is gearing up for his UFC 183 bout against Kelvin Gastelum. Prior to that bout however, the possibility of a bout between Woodley and his teammate Hector Lombard was widely discussed.

When Lombard booked his fight with Josh Burkman earlier this year, he informed media members that the reason he wasn’t fighting Woodley because Woodley was afraid of him.

“I’ve accepted fights within 10 minutes. ‘Hey Tyron, we want you to take Hector Lombard’s fight — Mr. Injured, and then all of a sudden healed — we want you to take his fight (at UFC Fight Night 48), and I said let me go train. I’m in Singapore on vacation, I go train for one hour, I get back on the phone and I miraculously saved a card. People don’t remember that. They’ve got a very short-term memory, they’re very conditional, so you’re right, at a certain point I was about to pop off, because I was getting pissed off.”

The bout Woodley is referring to at UFC Fight Night 48, is from August, when Woodley fought Dong Hyun Kim, stepping in on short notice for Lombard.

“If you know where I’m from and you know what I’ve been through in my life, I haven’t always been the person that I am right now. Me being scared of somebody is not very likely, so when people say those things you want to kinda get back at them,”

“So I just try to stay focused. I was hoping that when I got a new opponent and when he got a new opponent, maybe people would start focusing on their opponent. But obviously I’m on someone’s mind quite often and my name stays in the same sentence.”

What are your thoughts on teammate vs. teammate bouts, specifically a bout between Lombard and Woodley? Sound off in the comments section!