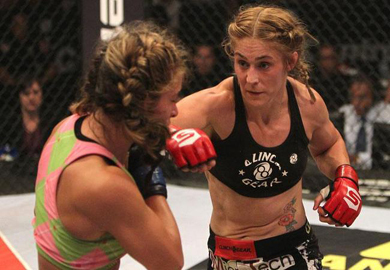 Women’s MMA has returned to Bellator, as the organization recently announced the signing of two notable featherweights!

Bellator officials announced today that they have inked former Strikeforce Champion Marloes Coenen (21-6 MMA) and Invicta FC veteran Julia Budd (6-2 MMA) to deals and that the pair will fight at a Bellator event later this year.

Bellator had shut it’s doors on Women’s Mixed Martial Arts just over a year ago. But, with former Strikeforce head Scott Coker taking over the helm of Bellator, WMMA is once again a priority for the promotion.

“We’re incredibly excited to bring in two of the best athletes competing in our sport today,” Coker stated. “We are making a commitment to bring back the female division to Bellator, and feature some of the world’s best in the Bellator cage.”

33 year-old Dutch fighter, Marloes Coenen, has gone 2-1 since losing her Strikeforce title to Meisha Tate in July of 2011. “Rumina” was last seen in action at the Invicta FC 6 event in July of 2013, where she suffered a fourth-round TKO loss to Cristiane “Cyborg” Justino.

Meanwhile, 31 year-old Canadian Julia Budd is currently riding a four-fight win streak, with all 4 victories coming under the Invicta FC banner. “The Jewel” scored her latest win in December of 2013 by earning a unanimous decision victory over Charmaine Tweet. Three of the Canadains past four wins have come by way of stoppage.

With the UFC currently only having two female divisons (115-pound and 135-pound), Bellator now has the opportunity to reestablish it’s 145-pound weight class for female fighters.