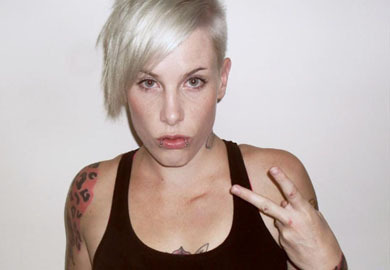 Bec Hyatt is more then a fighter, she is also a survivor of domestic violence.

This is her story, written by her in the hopes that others may be inspired to share their stories or use it as inspiration to get out of the horror of domestic violence and live the happy lives away from fear that they deserve.

It probably seems like a little bit of a contradiction that the past three years have been the best and at the same time, the worst time of my life. I’ve heard before that it’s the journey that shapes someone and not necessarily the destination. I wouldn’t give up where I am in life at the moment for anything but sometimes I wish that the journey I took to get here was a little different.

It was January 2010 when I started training. I’d just gotten out of a bad relationship and needed to do something for myself, so I began kickboxing as I was desperate to lose weight and begin the new chapter of my life with my son Zake who was 18 months old at the time. This is where I met Dan Hyatt, he showed me a lot of attention and went out of his way to hold pads and train me, it was nice to have that little bit of extra attention.

This friendship soon led to more and before I knew it we were in a relationship. At first he was very kind and caring. He would tell me that I was beautiful and deserved to be treated right and that my ex didn’t deserve me for the way he had treated me. We would do everything together, I felt safe and happy for the first time in a while.

Two months had passed and I started seeing a side to Dan that I didn’t like. He would lash out saying harsh things about Zake, saying he didn’t like the kid because he reminded him of Zake’s father. That’s when the arguments began.

Another month passed and I fell pregnant. Dan was happy and so was I, but now I see why Dan was happy. He had his power now. He owned me because no way would I leave him to be a single mum of two. He would remind me of that and tell me that no one would want me. He would tell me that I have “two kids to two different dads” and I “should be thankful that he wants me”. He would say that I’m “used and abused” and that I was “damaged goods”.

This is when he started to abuse me physically. We would have arguments over Zake and he would shove me into walls, hold me down and smother me with pillows, he would spit on me and pour things like milk and tomato sauce on my head, this wasn’t the worst of it and there is so much more that I had to deal with. He literally made me feel like the dirt on the bottom of his shoe. Sometimes he would break down in tears and apologize saying he “didn’t wanna do it but he had no choice – that I have given him no choice”.

He made it out as if it was my fault he’d hit me, if I “wasn’t so tarnished he wouldn’t feel resentment like he did and he wouldn’t have to hurt me”.

The worst thing was that I believed him. It was my fault and I deserved to be hit and spat on, I thought that I couldn’t leave and that nobody would ever want me. He had me believing that I really was “used goods”.

Fast forward a year and I had given birth to Enson. We had gotten married and moved to Queensland because Dan got kicked out of his gym for hitting me in front of his coach. I still can’t believe I went ahead with the marriage and moved my whole life to Queensland after everything he had done to me. I just kept telling myself “everything will be okay up here and we will have a clean slate, a fresh start,” and the reminders of my old life as well as Zake’s dad will be gone so he won’t hurt me anymore. I was wrong though, and the abuse got worse.

I was isolated; there were no family or friends to see the bruises except our housemate Mitch who acted like a social worker most of the time, trying to convince Dan to calm down and not to hurt me. Mitch was only a kid so when Dan did get out of control he couldn’t do anything except hide the kids from it.

The abuse would get more extreme; he would kick me, pin me down and elbow me, grind his elbow down my face and choke me unconscious. This is when I got serious about training.

I used my training as my escape; I could finally be me and forget about everything at home. I had my debut fight six months later, training twice a day, breastfeeding and having absolutely ZERO help from Dan. Looking back, this camp was by far the hardest that I have ever had. I had to fight to escape him to prove I can do something with my life, to prove I was worth something!

I got knocked out in the first round and to have my husband walk straight past my unconscious body on the ground to congratulate my opponent was the last straw for me. My love for him was dying and my need for him along with it. But in an almost clichéd fashion, I hung around in hope that he’d change.

He just found new ways to hurt me and control me. One day I finally called the police and left for a week. I came back with a DVO in place hoping I had woken him up. But he just found new ways to hurt me. He knew if he physically hurt me he’d go to jail so he would destroy the things I loved and things that we needed. The carpets were destroyed with cordial, the walls kicked in, the couches slashed, my clothes bleached and cut up, and the list goes on.

A day like Mothers Day is when we, as mothers are supposed to be recognized for doing what many feel is the most important job in the world. I’m not sure if that was a part of why things went the way they did but on Mothers Day in 2013 it was when I finally got the courage to leave. I packed the kiddies into the car and went to my mums. When Dan woke to find us gone – the house, my clothes and furniture were all destroyed, he moved to Tassie and I was left with no home, no furniture and no clothes. I was left to pick up the pieces once again.

I knew that this was the last time I’d ever go through that. I just wish I had of got the courage to leave sooner. What the boys have seen and heard can never be erased from such innocent minds. I can only hope I teach them what is right and wrong and they never grow up to follow in his footsteps.

Because of Dan I have to learn how to love and learn how to be loved again. I don’t know if I’ll ever be the same, but I will be okay, I’ll fight another day.

I would like to take this opportunity to thank FACAA for firstly encouraging me to tell my story and being there to help me through a very trying time and secondly for giving me a platform to share my story so that it may help and encourage others to write down their stories or to stand up to their abusers and say enough is enough and have the courage to leave. I did it and you can too !

FACAA has kindly offered to share the stories of other survivors of domestic violence. If you would like your story shared on their page either anonymously or with your name just inbox it to FACAA or email Adam at Adam@facaaus.org it will really help you and others. Like me you will fight another day !