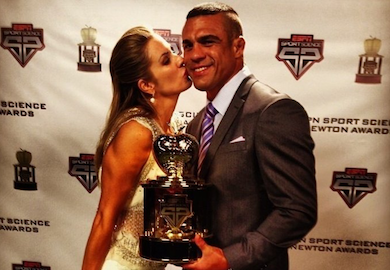 According to reports coming out of UFC Tonight on FOX Sports 1, Vitor Belfort is readying for his title shot, and expects to face the winner of Lyoto Machida vs. Chris Weidman.

Weidman vs. Machida takes place next Saturday from The Mandalay Bay Events Center in Las Vegas. Chris Weidman will look to defend his title for the second time in the night’s main event.

Belfort’s wife and manager, Joana Prado confirmed with the UFC’s news program that the promotion has promised Belfort the winner, keeping his number one contender status intact.

Vitor was originally slated to face Chris Weidman for the UFC middleweight title until the ban on TRT forced him out of action.

Belfort was then scheduled to face Chael Sonnen, but unfortunately for fight fans Sonnen retired before the bout could take place.