Home » MMA news » Why Chris Weidman Is Not Next In Line I Editorial<... 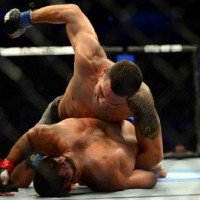 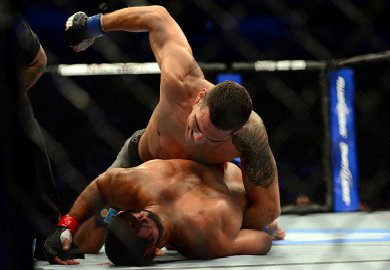 Any fighter who is on the cusp of the title picture calls out the champ of their respective weight class after a big win. Its just instinct. You just won a fight and now feel that you can beat anyone on Earth as the adrenaline continues to course through your veins.

Whether or not you are truly the next in line is a much different story.

As is the case with rising UFC middleweight prospect, Chris Weidman.

Weidman would appear to be on an unstoppable title run as he dominates his opponents and looks better in each fight and at only 28-years old, he might have made a definitive case for himself as he is 5-0 in the UFC and 9-0 over his career, finishing six of those fights.

His latest (and greatest) victory came from his outstanding second-round knockout of Mark Munoz, who had his signature ‘Donkey Kong punches’ used against him after a devastating elbow landed to his forehead.

Weidman looked absolutely incredible as he threatened with submissions and deadly strikes as well as dominating every second of the ground game, which is Munoz’s strongest area.

But does this performance automatically grant Weidman a title shot just because he beat a big name like Munoz? No.

One look at Munoz’s record reveals that in the talent-rich middleweight division, Munoz has defeated the gatekeepers of the division and holds two huge losses to Matt Hamill at light-heavyweight, and Yushin Okami in a fight where the winner got to fight for a title shot.

Aside from that, Munoz is known for dominating lesser opponents and can arguably be considered a gatekeeper himself for the time being, at least until he can get a win that breaks the top-5 mark in the division.

Thus, Weidman shouldn’t be regarded as the next in line to face the most dominate champion the UFC has ever seen. Instead, let this title picture clear up in the next few months and then we can start lining up challengers for Anderson Silva to try and knock down.

Just off the top of my head, several other fighters in the division come to mind as worthy adversaries to face Weidman to really prove his mettle: Vitor Belfort, Rich Franklin, Michael Bisping, Hector Lombard, Tim Boetsch, Brian Stann, Chael Sonnen, and Alan Belcher. All of these men (except for Bisping and Sonnen) are coming off of wins and would surely like to test Weidman as all eight of these men are seasoned veterans who have been impressive as of late.

Now again, I’m not saying that Weidman doesn’t deserve a title shot but instead, should prove his worth against at least one of these men to really clear up the title argument.

Most of those fighters do have fights scheduled already but Anderson Silva often takes long vacations in between fights and surely won’t still be fighting long enough to hypothetically defend his belt against upwards of nine people.

So instead, have Weidman thrown back into the mix and help him develop slowly so that if he keeps winning, we see the best Weidman yet to challenge Silva in what could be, at that point, the last fight of Silva’s career.

Not trying to take anything away from Weidman but if he rides this momentum train into a loss against Silva, then hes right back in the mix while critics harass him for not being up to the challenge at this stage of his career. Instead, fight one or two dangerous middleweights and come away with wins before we talk title again.

Then, if and when the time does come to fight Silva, we have a young and hungry challenger who has an even more impressive resume with wins over fighters who stand as more than just gatekeepers in a division that has quickly become one of the most talent-rich in the sport.