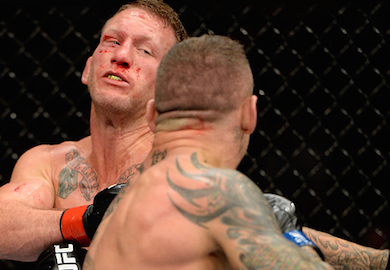 “Obviously he came here to fight, and he’s been cleared medically to fight, I think the kid is healthy. But, you know, it’s probably a discussion we might have. I’m not looking to chase Gray out of the game or anything like that. I’ll talk to him though. These guys go through extensive medical testing and we know getting knocked out isn’t good for you. But we’ll see. He’s a young guy, he’s talented, we’ll see what he wants to do.”

Saturday, Gray Maynard suffered his fourth brutal stoppage loss in five fights, his third in a row. Many want to see “The Bully” retire, but White isn’t sold.

During the post-fight presser (Replay HERE) the UFC boss discussed what’s next for his former lightweight title challenger.