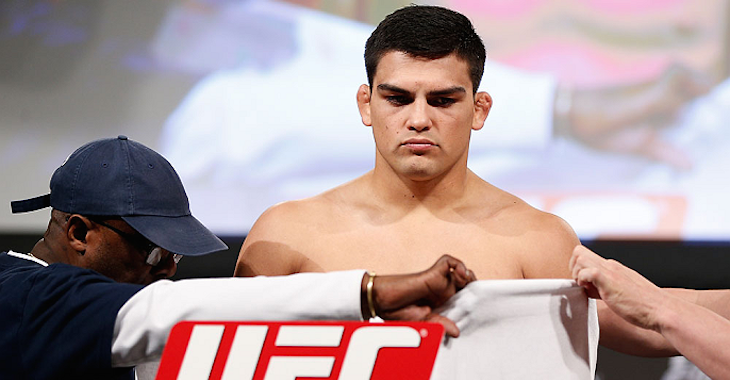 Kelvin Gastelum made his return to the middleweight division at “UFC 188” when he fought veteran Nate Marquardt on the main card. Gastelum looked impressive and forced Marquardt’s corner to call the fight in between the second and third rounds.

Gastelum expressed interest in a welterweight return prior to this bout with Marquardt, but UFC President Dana White is having none of that; Kelvin Gastelum seems to be staying at middleweight for the foreseeable future.

“He’s done nothing to prove he can make 170 pounds, and when he doesn’t make 170 pounds, it’s dangerous and it screws a lot of things up around here,” White shared during the “UFC 188″ post fight press conference.

Gastelum has missed weight several times as a middleweight in the UFC, most recently against Tyron Woodley at UFC 183 in January.

“[In middleweight], he looked healthy, he didn’t look like he was going to die at the weigh-ins, and he looked great tonight. So if you’re me, or anybody who even remotely cares about the kid, where would you want him to fight At 185.”

Do you see Gastelum becoming a champion in the middleweight division? Do his chances increase as a welterweight? Share your thoughts in the comment section below!