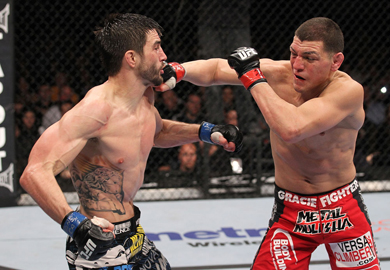 With the retirement of mega-star Georges St. Pierre, the UFC welterweight division’s stacked deck of cards has been shuffled. The fate of the UFC Welterweight Championship has been decided as Johny Hendricks and Robbie Lawler will duke it out for the vacated belt at UFC 171 in Dallas, Texas on March 15th. Looking to prove that the UFC’s welterweight division could survive without St. Pierre, Dana White was looking for a welterweight co-main event that was just as exciting as the title bout.

Dana White offered Nick Diaz a second shot against Carlos Condit who beat Diaz back at UFC 143 in 2012. Condit accepted almost immediately, but Diaz declined the bout. “I was trying to make Carlos Condit vs. Nick Diaz, and Nick Diaz turned the fight down tonight. He doesn’t want it…”.

White went on to say that Diaz offered to fight the winner of Johny Hendricks and Robbie Lawler. Nick Diaz is looking to make his octagon return in May 2014. He hasn’t appeared in the cage since his loss to Georges St. Pierre at UFC 158.