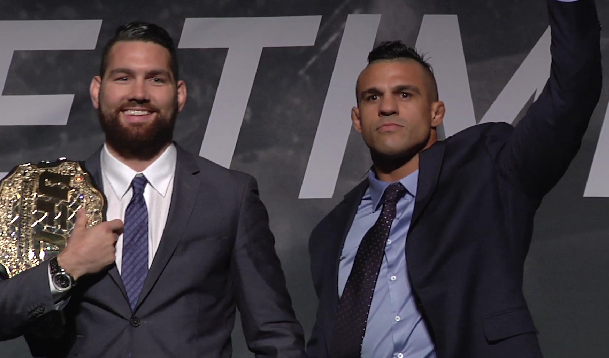 “I’m worried about whether he’s going to get drug tested, then when I found out he did, I’m crapping my pants the past two weeks, hoping he’s still fighting me. That’s the guy I want to fight. That’s what the fight we’ve been talking about for a year now. That’s the fight I want. I’ll be disgusted if something happens. When it was first lined up, I had a feeling it wasn’t going to happen. I had a feeling something bad would happen. It was around the time of the whole TRT thing. I never really got too excited about the fight. Then after the [Lyoto] Machida fight, I started thinking about him again.”

“I don’t want to take everything away he’s ever accomplished. But if you look at him in some of his fights, it’s kind of crazy, what human being looks like that naturally? Go into your own logic and figure that out on your own. But I’m not going to be the guy who victimizes him and says he’s juicing, because I don’t really know, I wasn’t there with him getting tested or watching him getting injected. However, I think in the last couple fights where he got caught, and why was he in Brazil fighting, bigger than ever, there was some weird stuff going on in those three knockouts he had.”

During yesterday’s UFC media day Chris Weidman discussed the difficulties of preparing for a fight against Vitor Belfort.