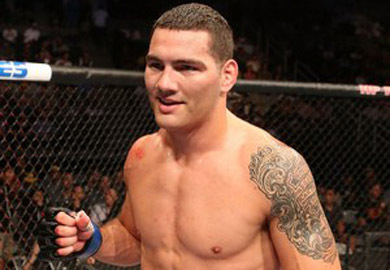 “You know what’s funny about Bisping? I actually really like the guy, I got to meet him in that boring fight I had against Demian Maia, which I took on 10-days notice and had to cut 32 pounds in 10 days and he was there when I’m cutting weight and seen what I actually went through and for him to come out and discredit me like that, a little bit of a scumbag move… I think he’s promoting himself, he has to discredit other people and especially when I’m ranked ahead of him in most of the rankings of course he’s going to try and discredit me, but, you know what I didn’t like and I saw when he came on, how he actually like broke man-code by actually mentioning about Luke Rockhold and his sparring, I don’t like that, that kind of pisses me off. You don’t — never do that I don’t care what you want to do. So, I really didn’t like that and I would love to shut him up with that, but we’ll see. It’s either him or Anderson Silva; those are the two guys that would be exciting to fight.”