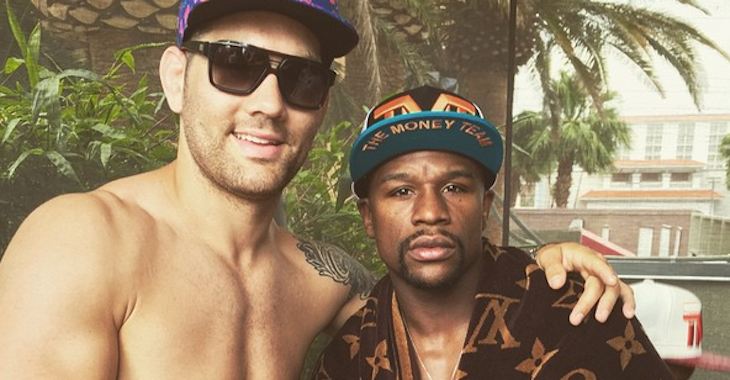 After he successfully defended his UFC Middleweight Championship against Vitor Belfort at UFC 187 in May, Chris Weidman celebrated his big win with none other than Floyd “Money” Mayweather!

Mayweather was coming fresh off the biggest win of his career as well. He had just defeated Manny Pacquiao in one of the biggest fights in combat sports history in a record-setting event that shattered previous pay-per-view records.

In a recent interview on the MMA Hour, Chris Weidman broke down what it was like to chill with “Money”.

“We had a conversation, he was cool, he knew all about me,” Weidman said. “He sent Chuck Zito to come get me to come hang out with him, that’s the way it went down. He was cool, it was a good experience. He’s definitely a good guy to know. … He’s a pretty down to earth guy, he loves money, and he’s as successful as you can possibly be as an athlete. I’ve got respect for him.”

Mayweather wasted NO time in bragging about how much money he was making. He tried to share his knowledge about finances with Weidman, but ended up just listing off all of the stuff he owned. “I just talked to him about business stuff, he told me how much money, he just went right into money,” Weidman said. “He’s Floyd “Money” Mayweather for sure. I’m like ‘Hey how are you doing man, I have a lot of respect for you.’ He was like ‘Aww, I made so far $125 million,’ I was like, ‘Wow I didn’t even ask you about that, but that’s awesome.’ [Mayweather said] ‘I own a private line of planes, I own everything.’ I’m like,’ that’s awesome, I didn’t ask you, but that’s great to hear. I wish I had all that stuff.'”