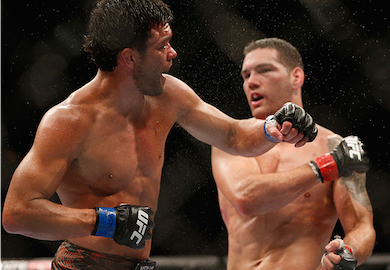 “I went through a two-day period where I was very nervous, and felt, you had mentioned my hand, and I thought I was going to have to pull out of the fight. I couldn’t touch my thumb to any of my fingers. I couldn’t grab anything, I couldn’t squeeze a toothbrush, couldn’t brush my teeth. I could do it with my right hand, but not my left. But you know, you just start figuring things out. Like, how bad this if I can’t do these little things? So I kind of was scaring the crap out of myself.”
…
“So they did the MRI and I had to wait on the results, and I was really just pissed off, and I was depressed,” he said. “I was like, how am I going to deal with this? It was a bad situation. If it’s not broken, obviously I’m not pulling out, but how am I going to train for these last two weeks. I can’t even touch my fingers together and I can’t obviously punch. It was a tough day with that. It was ligaments that were all messed up and sprained. So, I got cortisone injections, which they even told me probably won’t help much because it’s not really an inflammation issue. But I asked them to do it anyway, just anything that might help.”

In a recent interview with ‘The MMA Hour’ UFC middleweight champ Chris Weidman revealed a pre-fight secret he delt with prior to his most recent victory over Lyoto Machida.