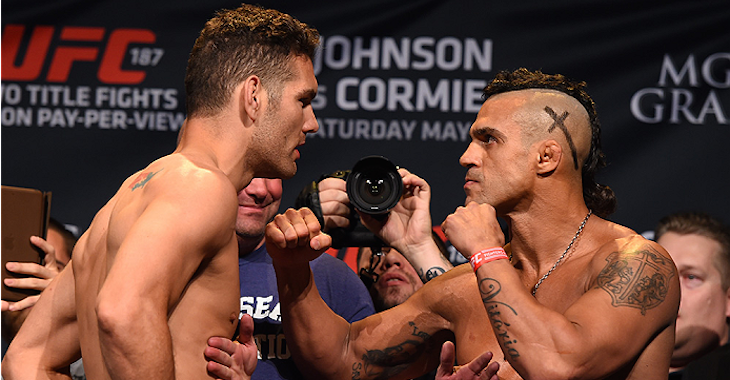 Chris Weidman has been confident about his championship defense against Vitor Belfort before the bout was even announced for “UFC 187”. Weidman has defeated the likes of Anderson Silva and Lyoto Machida, so he was confused as to why people were doubting him against “The Phenom”.

Belfort happens to possess some of the fastest hands in the middleweight division and Weidman got a little taste of that last night. “I did think I’d finish him in the first or second, but I didn’t expect getting punched in the face so much,” Weidman told the Fox Sports 1 crew during the post fight show. “We knew he’s going to start fast. You let the guy waste his energy when he does that, but then I decided to get out of the way.”

Michael Bisping, who suffered a loss to Vitor Belfort earlier in his career, knew that Vitor was going to come out with guns blazing in the opening round. “You know Vitor is going to explode at the beginning of the fight, but Weidman did a great job covering up, weathering the storm and then taking him down.”

Who should be next in line to challenge Chris Weidman for his title? Share your thoughts in the comment section below!