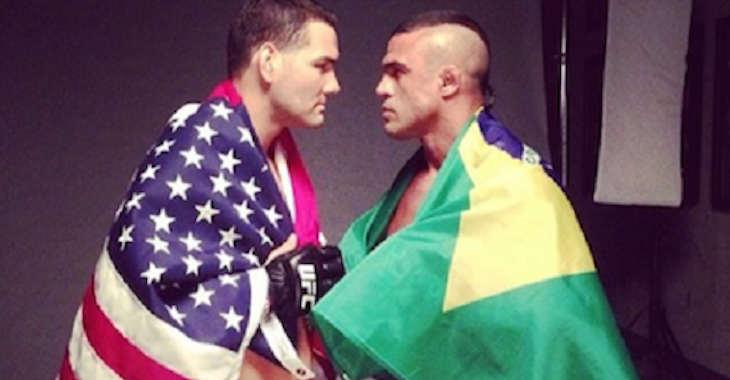 Chris Weidman has been waiting for almost a year to fight Vitor Belfort. Now that the injuries have healed and technicalities are settled, Belfort will be stepping into the octagon this Saturday to challenge Weidman for his UFC Middleweight Championship.

Chris Weidman appeared on “UFC Tonight” and broke down his fight against “The Phenom”. “I’m excited. I’ve been thinking about him for about a year,” Weidman confessed. “I’m ready to get past him. Anderson Silva was on my mind for six years. I’m ready to run right through this guy, dominate him and make a statement.”

Weidman has been all about making statements lately. His plan is to take over the division in similar fashion to Anderson Silva and prove that he is the king of the middleweights. “…I need to make a statement to 85ers that they don’t stand a chance against me.”

When analyzing Belfort’s game, Weidman says he is impressed but he has fought quicker fighters. While Belfort does possess impressive speed, he believes “The Dragon” and “The Spider” were faster. “[Belfort is] very explosive, I wouldn’t say he’s quicker than Silva and Machida, but he brings a more straight forward game, but with explosive speed. He was known for fast hands, now with the head kicks and spinning kicks, he’s able to mix it up. He’s definitely improved. He’s changing his game and evolving.”

Who do you have walking out with their hands raised in victory at “UFC 187”?