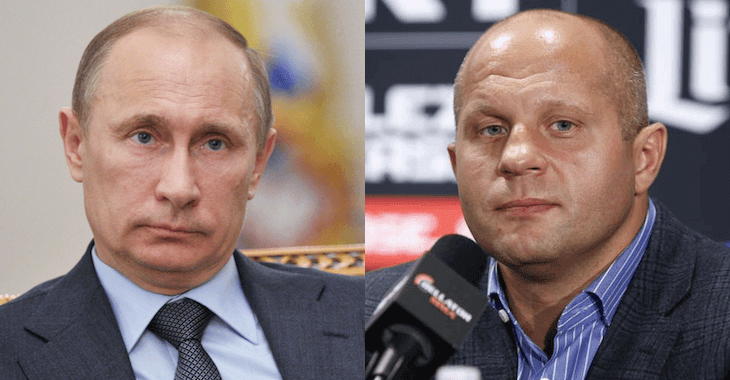 Fans can expect some of the biggest names in mixed martial arts to make their way to Japan to see the return of Fedor Emelianenko live, but this potential spectator came out of left field.

Former PRIDE FC President Nabuyuki Sakakibara announced the signing on “The Last Emperor” at Bellator’s “DYNAMITE” event on Saturday and confirmed he would be fighting in a new Japanese based promotion. While an opponent has yet to be named, it is official the fight will take place on New Year’s Eve on December 31, 2015. Emelianenko’s deal with the new promotion is expected to last only two fights, then the Russian’s future is up in the air after that.

Sakakibara mentioned in a recent interview that he would love to have the biggest names in attendance for his first event, and he may personally invite Vladimir Putin for ringside seats. “I think it would be great if as many Russians as possible were able to watch our fights,” Sakakibara told RSport.Ru. It would be wonderful if President Putin would be able to come on December 31 event and to see the return of “The Last Emperor”.”

When asked if he was serious about inviting Putin, Sakakibara mentioned if he needed to go through the Japanese government in order to get it done, he will! Do you think this is a good idea? Would Putin actually come? Share your thoughts in the comment section below!