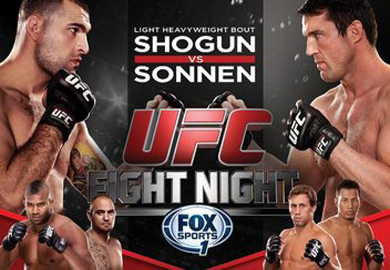 The Ultimate Fighting Championship is locked, loaded and ready to debut on the brand new Fox Sports 1 Network this evening with UFC Fight Night 26: Shogun vs. Sonnen.

This super stacked card will air live from the TD Garden in Boston Massachusetts and features several notable fighters the likes of Alistair Overeem, Urijah Faber, Joe Lauzon and many more.

Immediately following the main event on FS1, tune in here to BJPENN.COM to catch the live broadcast of the media-only post-fight press conference.