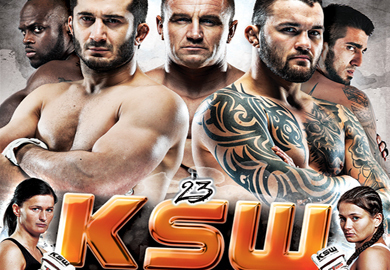 The most outstanding MMA promotion in Europe KSW opens the summer season with fantastic mixed martial arts extravaganza in the most beautiful venue in Poland – Ergo Arena in Sopot/Gdańsk on June 8th 2013. KSW 23 features the greatest MMA warriors in this part of the world in seven spectacular match-ups. The show is available live worldwide on online PPV on www.kswtv.com.

In the main event of night the best fighter in Poland Mamed Khalidov battles the K-1 knockout artist Melvin Manhoef. The undefeated in KSW Pole has yet to face such a dangerous striker in his professional tenure. Fighting one of the most gifted power punchers in the history of MMA will be a great challenge to register in combat sports legacy. The Dutchman promises to shock the Polish crowd and wants to knock out the local hero.

The co-main attraction of the evening features former five-time World’s Strongest Man Mariusz Pudzianowski in his toughest test to date against UFC veteran Sean McCorkle in the super heavyweight contest. Pudzianowski never hesitates to accept tough fights and this time he faces not only a more experience fighter, but also competitor who dwarfs him in terms of physical attributes. The American may be one of a few mixed martial artists in the world, who match the mighty Pole in strength.

The KSW middleweight title will be on the line, when the defending champion Michał Materla squares off against Kendall Grove. Materla proved he is a forced to be reckoned with scoring five consecutive KSW victories, including a memorable war against Jay Silva and a flash knockout against Rodney Wallace. The Hawaiian returns to Poland to bounce back from his December’s loss and take the belt from the Polish superstar.

The remaining matches of the show include the best welterweight in Poland and the current KSW champion Aslambek Saidov fighting against the dangerous finisher Ben Lagman in the non-title affair. Meanwhile ladies Karolina Kowalkiewicz and Marta Chojnoska compete in the final of the first KSW tournament to crown the inaugural KSW women’s champion at 55 kilograms.

Seven exciting fights featuring some of the best fighters in the world guarantee the unforgettable three-hour feast for every MMA aficionado. Do not hesitate, order the KSW 23 PPV today.

– Go to the top right of the page and click the British Flag to change to English.
– Click the ‘Sign In’ tab and enter your information.
– Check your email for an email from KSW titled ‘Link confirming identity.’
– Click the link in the email.
– Click ‘Buy’ on the KSW website and sign in with your user/pass here.
– Now click the Paypal button, order the PPV and enjoy!